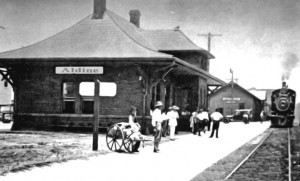 The Aldine community dates back to the 1800s when railroad companies established engine switching stations there for northbound routes. The stations served as a convenient delivery point for dairy, cattle, and poultry producers.

The District is dissected by both Halls Bayou and Greens Bayou. Water service in Aldine is provided by approximately 10 municipal utility districts, while nearly half of all residents rely on private water wells and septic systems. Current land use is predominantly single-family residential along with a sizeable industrial component. However, over a third of the total acreage is vacant. Population growth is slower than that in Houston or Harris County. Retail space occupancy is currently stronger than in the overall Houston market – 97% vs. 84%. Industrial space occupancy is also somewhat better. Bush Intercontinental Airport is a major driver of North Houston area economic development. Vehicular traffic on US 59 is expected to almost double in the next 20 years thereby benefitting development along that artery. There appear to be attractive mid-term development opportunities in medium-size office/warehouse and small manufacturing and services facilities. Longer term, apartment, retail, restaurant, professional office and single-family housing development opportunities should be available.

The District should position itself to attract small industrial and service businesses. Capital improvements completed, underway or planned will enhance the District’s appeal. In addition, there are a number of organizations and programs that support economic development. As a strategy, the District should focus efforts on two corridors – JFK north of Aldine Mail Route and US 59. Consideration should be given to acquiring and land banking properties along the east side of 59 prior to completion of water and wastewater improvements in that area.

In creating the improvement district, the citizens of Aldine sought to: present a unified voice for themselves; acquire maximum governmental services and supplement them where needed; render focused management of the area’s needs; gain the authority to raise revenue for area improvements; and enhance the area’s physical, social, and economic well being. In August 2001, voters of the District approved a one-cent sales tax that took effect on January 1, 2002. Today the tax generates approximately $10 million in annual revenue for public improvement projects and services.

With input from area residents, business owners, and civic leaders, the District’s board of directors created an eight-point Service and Action Plan outlining the community’s goals and priorities. Since adopted in August 2002, the board has taken direct action to implement projects and services pursuant to this plan to improve the quality of life for those who live, work, and conduct business in East Aldine.