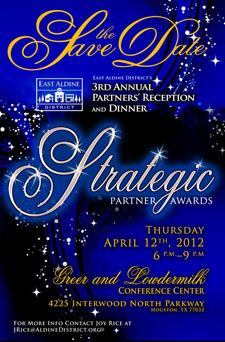 East Aldine District held their annual Strategic Partners Awards Reception on Thursday, April 12th 2012 at the Greer and Lowdermilk Conference Center in Interwood. The district recognized a number of community leaders at the event that have partnered with the District to improve the east Aldline area in may different ways.

Introductory remarks were made by the District CEO/President, David Hawes, and board Chairman Gerald Overturff. Emcee for the evening was HICC Chamber president Reggie Gray, who quipped his way through an enjoyable evening.

The evening started with the showing of the video “State of the District” showcasing the progress East Aldine District has made in it’s ten years of existence.

“I just want people to be proud of Aldine”, said Overturff who spent all his life in Aldine. He went on stating what difference the district has made already.

Flor Rios received the top award as Volunteer of the Year. She received the award not only for her contributions to the district, but also for representing a model resident of East Aldine.