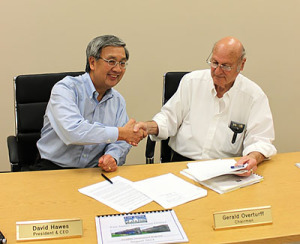 On August 10, 2014, the East Aldine District (EAMD) Board of Directors, along with State Representative Armando Walle, Dr. Melissa Gonzales, Vice President of Lone Star College (LSC) – North Harris and the EAMD staff, took a tour of the Neighborhood Centers, Inc. (NCI) Baker Ripley Center. The purpose of this tour was for the EAMD board to see all of the services and potential programs that could be brought by NCI to the East Aldine community. The EAMD board members toured Baker-Ripley’s classroom interactions that they have for all ages, from pre-school to adult ESL classes, including programs that are used to teach basic work, trade and business skills.

EAMD board members met with NCI Executive staff, and heard firsthand the story of how the interest in East Aldine began, and how NCI can help in bettering and building the Aldine community. The tour helped the EAMD board to get a better understanding of NCI sites and programs. Ultimately allowing them to see how much these centers can help build better communities and work towards bettering the future of the East Aldine community.

On Tuesday, September 16th, the EAMD board approved and signed a Memorandum of Understanding with Neighborhood Centers, Inc., so that a new community center can be built on East Aldine’s Town Center site. Construction of the center is tentatively set to begin in Spring/Summer 2015.