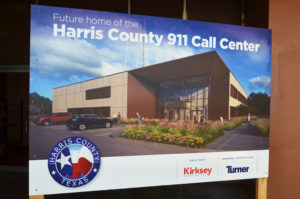 On September 22, the Harris County Sheriff’s office, dignitaries and elected officials and the community joined the East Aldine District to officially break ground on their new 9-1-1 facility which will be located the East Aldine Town Center.

The new 9-1-1 facility is part of the overall Town Center complex a $65M project which includes both public and private investment. Once completed the center will have 300,000 sq. ft. of commercial and institutional space in the center, including: a Lone Star College, East Aldine campus, with an early college high school, facilities for Neighborhood Centers Inc., including an innovative “maker space”.

The center will also have 100,000 sq. ft. of commercial retail and office space including a new facility for the East Aldine District offices, an amphitheater and community green with a capacity for 1,500 people with splashpads and play areas, stormwater detention that serves as a large scale passive green space and roadway and trail access to Keith-Wiess Park.

Chairman of the East Aldine District, Gerald Overturff stated “we are thrilled that the Harris County Sheriff’s office, Lone Star College and Neighborhood Centers have joined us in this economic development partnership. Over the next few months and into the new year we will have more groundbreaking ceremonies and ribbon cuttings so we invite you to stay tuned via our District website at AldineDistrict.org and join us at the upcoming ceremonies. Many thanks to everyone who has joined us today to celebrate!”