Sgt. Terry Garza made a presentation to the East Aldine District Board of Directors on March 20th sharing a wonderful success story on the Explorer’s Program which is generously support by the District through their community development fund. 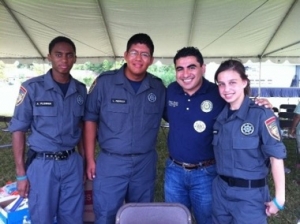 “In October 2011, the Harris County Sheriff’s Office Explorer Program was started. Post 42 was formed and one of our very first recruits was Explorer Luis Pedraza, who attended MacArthur High School and was in the Law Enforcement Class at school. Luis was one of our Best Explorers and was promoted to Explorer Lieutenant and because of his dedication to this program, he won numerous trophies in competitions, especially focusing on Standardized Sobriety Field Testing. Due to him we won First Place in every competition where he took the lead in DWI Investigations. 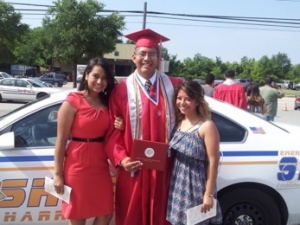 Luis was also in the National Honor Society graduating in the top 20% of his graduating class in 2013. Luis was awarded a Pell Grant, Texas Grant and an HCSO Explorer Program Scholarship. His parents told him once he graduated from high school, he could not attend college, instead he was needed in his father’s roofing business and he would have to go work with his father.

Luis immediately let his Explorer Advisors, Deputy Terry Garza and Alex Palizo, know what was going on. The Advisors intervened and spoke with his parents and explained the importance of Luis furthering his education. 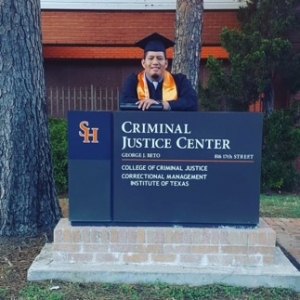 Luis graduated from Sam Houston State University in December of 2017. He is currently working at the Amazon Fulfillment Center in Houston and considering returning to Texas State University to get his Master’s Degree.

Luis Pedraza was contacted last night and I asked him for a quote, “The Measure of life is it’s service”. This took me back to my time with the Explorer’s and how it made me feel part of the community but also part of a bigger family. The volunteering, public relations, and the discipline all helped me figure out what type of person I wanted to become. Which lead me to be a Resident Advisor on campus.