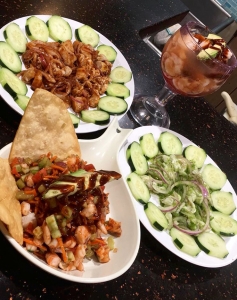 To a great many Anglo Texans of a certain age, “Mexican food” means fajitas, cheese enchiladas, chili con queso and margaritas. In other words, Tex-Mex.

Sure, many have also come to learn about and enjoy taqueria-style street foods, either from taco trucks or brick-and-mortar restaurants. (Some of which evolved from what used to be a taco truck.)

Many Texans call that fare Mex-Mex in contrasting it to Tex-Mex.

Open up that Mex-Mex box and you’ll find unlimited treasures within. Mexican regional cooking is just as varied the many regional styles of music you find south of the Rio. (No, it’s not all Tejano, norteno or mariachi.)

And the East Aldine Management District brims with regional Mexican fares. In driving around the area you will find establishments proudly announcing themselves as offering up specialties from the cities of Monterrey and Mexico City and the states of Jalisco, Michoacan, and Sinaloa. Which brings us to Culichi Town, the only Texas outpost of a California-based chain offering up the Japanese-influenced dishes of Mexico’s Pacific coast, specifically the Sinaloan capital city of Culiacan, whose natives are known as Culichis.

Culichi Town aims to be just that — a festive little village on the Gulf of California, just across the water from Baja. There’s a thatched-roof outdoor dining area. The interior consists of riotous shades of bold primary colors, and the stage is home to frequent performance of live banda music — yet another style of Mexican music. (Think lots of horns and of the sounds you would hear at a circus.)

And then there’s the food. It’s one of the most playful and humorous menus I’ve ever seen, and one that is to me, very strange, if wonderful. They sometimes bill themselves as a Mexican sushi restaurant, but that sells them short. For one thing, the sushi rolls themselves are unlike anything you would find a traditional Japanese bar. Culichi Town offers dozens of variations, and I think every single one of them contains cream cheese. You can order a deep-fried sushi roll — the Guerrero — which contains exactly no seafood but does pack in beef, chicken, bacon, avocado and the inevitable schmear of cream cheese. Oh, and some Monterey Jack cheese, as well. So all that gets breaded and deep-fried and then what emerges from the hot oil is drizzled with cilantro and a chipotle dressing. 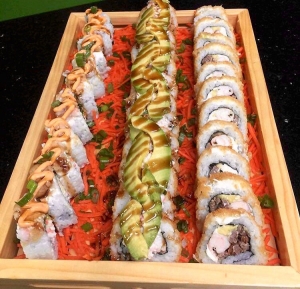 And yet unlike so many Mexican restaurants in Houston, Culichi Town seems to be the one your cardiologist might recommend the most, Guerrero-roll (and other fried rolls) notwithstanding. They feature entrees they simply translate as “snacks,” and these tend to be little heaps of seafood — shrimp, octopus and many with scallops — slathered in sauce. But instead of scooping these mounds of bounty up with a tostada chip, you are encouraged to use sliced cucumber instead. (Low-carbers and Paleo warriors rejoice!)

They offer a half-dozen styles of taco and none of them contain any terrestrial proteins — it’s all shrimp and fish, including marlin. And a first for me — an octopus taco. If you want hot seafood soup, they got about ten different styles; and if you want cold seafood cocktails they’ve got you covered too. And then there is their crown jewel — The Tower: cooked shrimp, lime-marinated shrimp, octopus, scallops, and imitation crab on a bed of ceviche and the sweet and smoky salsa negra much beloved by Culichis, judging by its ubiquity on the menu.

And then somewhere along in the tostada section the menu starts to get weird. One of them is called Hulk, because it is green, thanks to cucumbers, cilantro and a rare salsa verde intermingled with shrimp. Maybe orange is more your color — for you there’s the Hot Cheeto tostada: lime-cooked shrimp, red onion, tomato, cilantro, chamoy, cucumber and salsa verde, all topped with a dusting of actual spicy Cheetos.

On the night I was there, most of the patrons were drinking micheladas and some had little toothpicks on which shrimp were speared for dunking in the tomato and beer concoction. They also offer an array of margaritas — tamarind, mango, strawberry and lemon.

The whole experience was slightly surreal. I’ve been going to Tex-Mex restaurants for about 45 years that I can remember, and Culichi Town had about as much in common with the fare I was raised on than, well, I once would have thought, Mexican food and sushi. And yet there it is.

And all this uniqueness can be found right here, within the borders of the East Aldine Management District.