AERIAL VIEW of the new East Aldine Town Center as taken by a drone. Aldine Mail Route is in the foreground, Keith Wiess Park beyond, and on the horizon downtown Houston. The center includes the Harris County 9-1-1 Call Center, at left, the BakerRipley complex at the center, and the Lone Star College-North Harris campus at right, with an Aldine ISD early college program. The cleared land at left will be a commercial development, including a Joe V’s supermarket. The land beyond BakerRipley will have new offices for the East Aldine District, and a public amphitheater and children’s park. (Photo by ev1).

The $100 million East Aldine Town Center project when complete will feature a Lone Star College campus, a Harris County 9-1-1 call center, the new home for BakerRipley Community Center (which has already been built), private commercial development, and the headquarters for the East Aldine Management District, and more importantly, it’s about the community having a place to learn, visit, and enjoy.

According to Don Huml the District’s Construction Manager for the development, there have been some unique challenges in getting the project off the ground. Or maybe more accurately, getting the ground out of the way of the project. 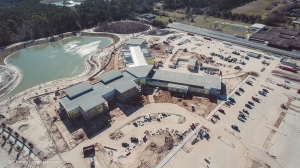 When the 61-acre parcel was purchased in 2013, it had been serving as a site to place the extra dirt that the Harris County Flood Control District needed to excavate in order to create the detention basin (lakes) in the adjacent Keith-Wiess Park. Before construction could begin on the town center, that dirt had to be scooped up and hauled away, a task that cost millions of dollars and several years in time.

Total construction will come to approximately 250,000 sq. ft. of commercial and institutional space, of which 100,000 sq. ft. will be commercial retail and office space, 64,500 sq. ft. will belong to Lone Star College’s East Aldine campus (which will include an early college high school), and 24,000 sq. ft. to the management district’s offices and 23,000 for the Harris County 9-1-1 call center. The remaining 33,500 sq. ft. is allocated to BakerRipley and includes a “maker space” to assist in skill and business support for the East Aldine community.

In addition to the institutions the town center will be hosting, there will also be both a retail component and amenities free to the general public, such as splash pads and a central park and playground area. The project will also include a Discovery Green/Miller Outdoor Theatre-style amphitheater with a capacity for 1,500 concertgoers. Area community leaders have formed the East Aldine Arts Council, which hopes to bring visual and performing arts to the Town Center grounds and facilities.

It is possible that the town center will also become the principal gateway to Keith-Wiess Park, supplementing the existing entryway on Aldine-Westfield. A future road access into Keith-Wiess Park, as well as several trail connections, are planned in order to tie these two world-class properties together. A future recreational/nature center is envisioned in the park which would complete the puzzle and put this 500-acre park and town center complex on the map of the Greater Houston region.

Huml says that the retail component will be anchored by a Joe V’s Smart Shop, a community-oriented grocery concept operated by H-E-B, and that the town center will eventually be home to restaurants, coffee shops, and more.

David Hawes, Executive Director of the East Aldine District, reflects back on the first meetings of the Board of Directors in 2001 noting that “while the Board of Directors was committed to addressing critical infrastructure needs, they accepted his recommendation to save their money during the first several years and focus on long-range planning.” This was advice that would serve them well in the years ahead. It was during this period that the board adopted a Long Range Strategic Plan for programmed services. The plan addressed water and sewer infrastructure development, public safety and security, community development, mobility, environmental and urban design, business and economic development, and public health and neighborhood services. 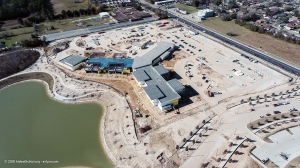 By the end of 2016, the District’s 15 Year Anniversary, all of the programmed services had been funded with more than $27,000,000 in General Fund revenues. Additionally, another $43,000,000 was invested in water and sewer projects and the district finalized plans for the creation of the East Aldine Town Center with a planned investment of over $100,000,000.

Hawes states “that none of the plans that have come to fruition would have been possible without those first critical years of planning on the part of the Board of Directors. It has been a long and wonderful journey and we want to thank everyone who has given so much to the East Aldine community to help implement the vision from those very first meetings so many years ago. As we approach the completion of the Town Center in the next several years we hope that you will continue to work with us and continue the legacy of leadership and commitment that has made the East Aldine District a place of “Unlimited Possibilities”