East Aldine offices were the scene for an important meeting last Friday, between management of METRO, and spokespersons for many institutions in the Aldine, Airline and Greenspoint District that oppose the cancellation of the Route 59 bus line.

METRO proposes to cancel this line, and six others on Feb. 26th, labelled as “low performing” because their ridership and fares do not meet goals of the transportation agency. 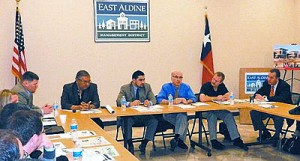 However, the speakers at the meeting made the point that serving the many institutions on Aldine Mail Route, including schools, health clinics, doctor and dental offices, social security office, shopping, police station, churches, senior housing, were important services that would severely increase travel time, inconvenience and social welfare costs if citizens did not have direct, efficient access to these services.

In addition, Scott Bean of East Aldine District pointed out to Grenias that METRO collected over $3 million in sales tax in the affected area, and did not provide any direct benefits in return.

Bolling pointed out that low-income citizens need easy access to services, or the community will pay later in increased social costs. This theme was echoed for the educational and healthcare segments as well, all of whom had a substantial number of clients relying on bus service. East Aldine chairman Gerald Overturff said in particular, senior citizens depended on this type of bus service for shopping and access to social and health services.

Grenias suggested that better sidewalks, and Metrolift service, were viable alternatives. However, this did not take into account citizens who cannot endure a longer walk.

The general concensus from the public group, was that Route 59 and the Northeast area needed increased transit service, not less. It was suggested that some routes, such as 59, 39, and 6 suffered from poor connections and limited routes, and would have higher ridership if these were improved. It was noted that they do not connect to any transit stations, and that transfers to other routes was very limited.

Looking for ways to keep the 59 service beyond the Feb. 26th deadline, East Aldine’s Gilbert Hoffman suggested METRO provide a cost figure for a subsidy that would achieve continuation. This would be discussed at the next board meeting on Feb. 21st.

Grenias said that the fare on all buses is $1.25 for local trips and must be subsidized on every route, from about $5 to as much as $20. He said that Route 59 was being cut because of low ridership, no hope for improvement, and a subsidy that now was costing about $10 per rider.

Grenias said that other cost savings, such as smaller buses, better connectivity, sidewalks, and Metrolift, might save money, improve service and help reduce costs. He said that reducing frequency of service was often self-defeating.

He did not discuss the $3 million sales tax money collected from the area, and not returned in transit services.

Both Bolling and Sanchez said that with the immigrant and low-income community in Aldine, more information and demonstration of how to use buses was essential to increasing ridership.

A discussion ensued on how to increase ridership. It was thought that a discount, and extensive advertising to explain routes and bus usage could help.
Grenias pointed out that the Q-CARD program currently in use provides a 50% fare discount to students and those over 65, and a Free ride to those over 70. Participants in the meeting pointed out that many people are not aware of these discounts.

An issue raised was whether METRO can eliminate routes serving “minority and low-income” populations, as defined by Title VI of the Federal Civil Rights Law of 1965. Grenias believed he was within the law, but his decision to eliminate bus service may be challenged on this basis, said some participants.

Senator Gallegos stated how important it was to continue the bus service on Aldine Mail, especially to the Social Security office. He said that a 2 hour ride from the west end of Route 59 to the east end was not acceptable, when it is now only a 16 minute ride the whole length of Aldine Mail.

Representative Walle ended the meeting by firmly stating that eliminating the Route 59 service was unacceptable. He also complained of the lack of notice that the area had about the changes that were imminent.