Skip to content
Home/Community, My East Aldine/Mom’s No Secret to Aldine Residents

Mom’s No Secret to Aldine Residents 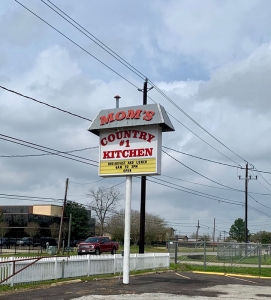 After more than two decades in business, with its hot and hearty Texas breakfasts and downhome Southern comfort lunches served either to order from the kitchen or cafeteria-style, Mom’s Country Kitchen (14428 Aldine Westfield Rd.) has earned the status of an East Aldine institution. (It’s right across the street from another venerable establishment — the Good Time Skate roller rink.)

Long and low-slung, Mom’s exterior somewhat resembles two boxcars melded together. The clean and cheery interior has a country feel with its walls of corrugated tin and blonde wood paneling. Vintage photos of smiling women adorn the walls — one suspect at least one of these is Mom herself. Or maybe all of them are. As suggested by the parking lot full of pick-up trucks, this is predominantly a workingman’s spot, but there is enough a feminine touch about the premises to attract a few tables full of women too. There is no grease on these spoons. 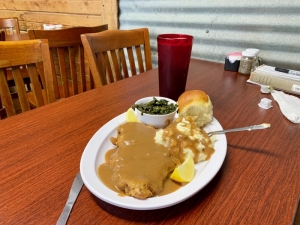 I opted for the cafeteria experience — when hungry, I will choose that route over sitting down and waiting for service and prep nine times out of ten. Make that ten times out of ten when the selection looks as tasty as what Mom offered up on the day of my visit. There’s a rotating array of entrees and sides — on the early March Friday of the main dishes included chicken and dumplings, liver and onions, lasagna, stuffed Bell peppers, and a little dilemma presented by the three entrees that most caught my fancy. They kind of stood for Greater Houston’s identity crisis as a whole: Should I go for Gulf Coast / Cajun Bayou City selection and order the seafood jambalaya, opt for the Deep South option with the fried catfish filet (this being a Friday in Lent), or go whole-hog Texan with the huge chicken-fried steak (this also being Rodeo season)?

In the end, Rodeo trumped the Holy Faith and I chose the CFS along with mashed potatoes and boiled spinach. As a somewhat rare devotee of brown gravy atop my chicken-frieds, I was glad to see I had that option at Mom’s and asked for a ladleful atop both taters and meat. Rarer still is my preference for a squeeze of lemon atop my chicken-frieds, and Mom’s had my back there too, with a tubful of very fresh lemons available near where you can also pick up your free house-made rolls or cornbread. (Yeah, lemon and brown gravy on a CFS is weird, I know, but that was how I grew up eating it. Try it sometime.) 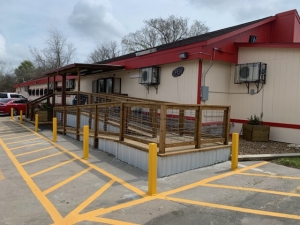 Taking notice of my pen and notebook on my tray, the matronly woman behind the cash register said “That looks like work. Of course, it isn’t work if you enjoy it…But if you don’t, you’ll get indigestion.”

She needn’t have worried. The CFS was perfectly fried. Too many gravies are bland — not so with this delightfully thick and flavorful concoction, with notes of…what was that? A hint of garlic? Maybe some onion in there? In any event, it added the perfect third note to the Holy Trinity of CFS — you want something tasty atop the crunchy-chewy combo of the breaded and fried meat. The mashed potatoes had just the right balance of firmness and creaminess, and the spinach, once adulterated to my customary level of butteriness, saltiness, and lemony-ness was also spot-on. The entire platter survived maybe ten minutes of my diligent attention; that was all the time it took from first slice of the CFS to last sop of gravy with my roll. Not bad for $11. 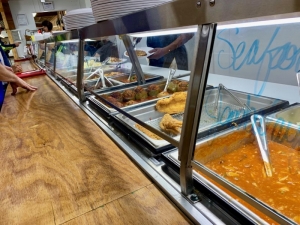 It’s a country-style blue-collar East Texas diner done right, but oddly enough, the place put me in mind of Nelson Algren, a Chicagoan who wrote with fondness about the brawling backstreets and byways of his tough hometown. Today he is remembered less for his books than he is few their titles (A Walk on the Wild Side inspired the Lou Reed song that is now much more widely-remembered) and a few quotes, perhaps most famously these hard-bitten words —
“Never play cards with a man called Doc,” he advised, adding that you should “never sleep with a woman whose troubles are worse than your own.” Fair enough, but then he veered off into complete folly with his third admonition, namely that you should “Never eat at a place called Mom’s.”

Well, it’s apparent Algren was never at this Mom’s. And while the Mom’s Country Kitchen is nothin’ fancy, that isn’t the goal here. The goal is to serve up perfectly prepared comfort food in a happy place for a fair price, which folks in the East Aldine District know well. Again paraphrasing Algren, who was then writing about the no-nonsense Chicago he preferred to the glitz of Lakeshore Boulevard and the Windy City’s leafy, ritzy residential neighborhoods, “you may well find lovelier lovelies” than Mom’s Country Kitchen. “But never a lovely so real.”