Tex or Mex? How About Both.

Home/Community, Economic Development, My East Aldine/Tex or Mex? How About Both.

Tex or Mex? How About Both. 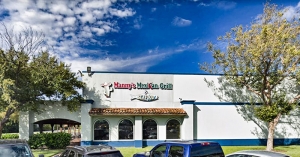 Menudo and beef fajitas. Pechuga (chicken) ranchera and chicken nachos. Tripitas (tripe) and quesadillas. Authentic Mexican dishes alongside their American cousin, Tex-Mex, paints a telling picture of not only Houston’s culture, but our taste buds. Flavors of Guadalajara, Monterey, and Mexico City find their way into the menu at Manny’s Mexican Grill & Seafood in the East Aldine District, while putting a greater emphasis on the “Mex” than typical Tex-Mex restaurants in Houston.

The reason for this Mexican infusion lies with Manuel Corral, founding partner of the restaurant, and “catalyst in the kitchen,” as described by his business partner Tony Raffa. “Manny cooks daily,” says Tony, which I could only assume was true when upon visiting the restaurant, Manny would occasionally emerge from behind kitchen doors, hurrying out to serve guests but returning quickly to work behind the scenes. 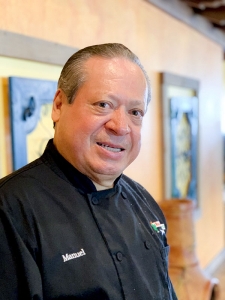 Drawing on the recipes he experienced as a child in Mexico, Manny assembled menu items to suit his Houston customers. Selected dishes reflect food traditions from both sides of the border, covering the spectrum from purely Texan to Mexican, and everything in between.

Whether you’re escaping I-45 traffic, dropping by during happy hour, or ordering Manny’s favorite, most popular dishes are best for feeding any hungry group. Manny recommends starting off with appetizers to share that have been enjoyed in Central and South American coastal communities for centuries: ceviche and pozole. The fresh seafood ceviche cocktail comes in a glass loaded with octopus, crab, and shrimp, or alternatively with avocado or fish on top of a tostada. 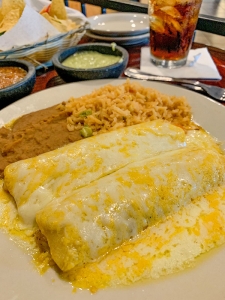 You’ve no doubt enjoyed ceviche before, but how about pozole? This pork, chicken, cabbage, cilantro and onion soup also contains something called hominy. Hominy refers to maize kernels prepared with a method unique to Central and South America, that dates back thousands of years. Pozole is still traditionally served for New Year’s Eve celebrations, Mexican Independence Day, and other significant celebrations, due to the indigenous people’s historic belief that maize was a sacred crop. Luckily, you can try it year-round at Manny’s.

For a hearty main dish, the Parillada platter is delivered sizzling with chicken, beef, shrimp, carnitas, sausage and quail served on a bed of sautéed onions and bell peppers. If that’s not enough to fill you up, add one of Manny’s grilled quail dishes to your order, topped either with chipotle, ranchera sauce, or simply “a la parrilla,” meaning grilled.

Redeveloped after the closure of a previous Blockbuster Video, Manny’s was entirely gutted, expanded, had its ceilings heightened, and installed new arch-topped windows. Golden, antique yellow walls, with modest decorations such as hanging tapestries, and a decorative tiled roof overhang fit the Mexican theme. The renovated, considerably spacious dining hall is well-suited for large groups, while the outdoor patio and bar area are fit for smaller parties. Customers oftentimes take the experience beyond the walls of the restaurant through allowing Manny’s to cater their special events. 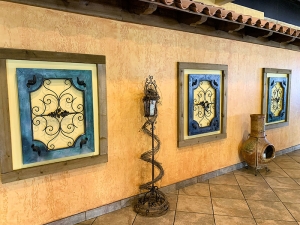 From the intentional style and cleanliness of the restaurant, to the variety of dishes Manny passionately creates, Manny’s Mexican Grill & Seafood strives to “bring style and class to the neighborhood, by maintaining a comfortable, family-friendly atmosphere,” says Tony. Serving everything from Tex to Mex, Manny puts his own history, experiences, and talents behind every dish at his namesake restaurant in the East Aldine District.