Home/Community, My East Aldine/Honoring Law Enforcement from Houston to D.C. 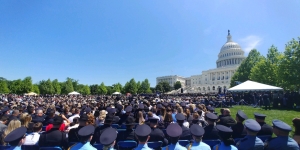 This month, our Harris County Sheriff’s Office (HCSO) Honor Guard traveled to Washington, D.C. to participate in the 38th annual National Peace Officers Memorial Service and the Candlelight Vigil. They joined 30,000 law enforcement officials and those from around the country wishing to pay respects to our nation’s officers who have fallen in the line of duty. This is the largest event of many that occur nation-wide during National Police Week every year.

As the third largest county in the United States, it makes sense that Harris County also has one of the largest Honor Guard units. Established in 1977, the 63-officer unit consists of peace officers who volunteer to appear at memorial services and funerals of fallen officers, conducting traditions that include the 21-gun salute, or the playing of “Taps” on the bugle. In addition to providing “full honors” at these services, Ramon Garza, Honor Guard Commander, explains that the unit also performs weekly duties at retirements, graduations, flag presentations, ceremonial promotions, and other special occasions.

“We have a gun team that performs the 21-gun salute, a flag team, color guard, a choir, a bagpiper, two drummers, and a bugle player, all under the command of the squad leaders,” says Garza. “All Honor Guard members have their own assignments within the Sherriff’s office. All are licensed peace officers. They may be investigators, court bailiffs, training supervisors, recruiters, and more,” Garza explains. “Sherriff Gonzalez is in full support of what we do,” he says, a sentiment which allows the Honor Guard to keep a busy schedule, averaging two events every week.

Brian Burks, Deputy Executive Director of the East Aldine District, describes the Honor Guard as “representative of the whole Sheriff’s Office and community. People from all walks of life, ethnic backgrounds, and cultures serve in this unit.” 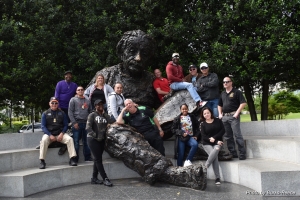 Commander Garza, a native Houstonian, joined the HCSO Honor Guard in 2010, after years of experience in the United States Marine Corps Honor Guard. “I attended the funeral of a very close friend who was killed in the line of duty. When I saw the Harris County Honor Guard there, doing as good a job as the Marine Corps, I knew I wanted to be a part of that,” he remembers.

Brian Burks was struck in a similar way when witnessing the unit in action. “My first encounter with the HCSO Honor Guard was in 1979 at the funeral of a fallen comrade. Their presence brought a level of dignity and respect to the event that I will never forget,” he explains.

Due to their nation-wide recognition for talent and professionalism, other honor guards in the region often travel to Houston to be trained by our Harris County Honor Guard.

During this year’s series of memorial events in Washington, D.C., the HCSO Honor Guard was present during the ceremonial “roll call,” a naming of officers killed in the line of duty in years past, and whose names will be added to the National Law Enforcement Memorial wall. Surviving family members of fallen officers were escorted into the ceremony, and respectfully acknowledged. Audience members held candles representing the 21,910 officers who have been killed in the line of duty over the course of our nation’s history.

President Trump spoke at the Memorial Service, expressing his “unending gratitude to our Nation’s law enforcement officers; those brave men and women selflessly confront danger to protect our families and defend our communities.” 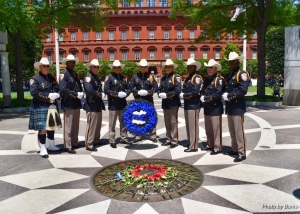 Houston holds its own commemorative events for our own police officers in May, through the Annual Police Week Memorial Service. The event occurs at the Houston Police Officers Memorial site, where the traditional roll call is announced, honoring the 114 officers who have fallen in the line of duty in Harris County. A candlelight vigil, a 21-gun salute, and a fly-over by HPD police helicopters mark the occasion, as detailed on the Houston Police Officers Union website.

“My gratitude for the presence of the Honor Guard lingers today. These men and women are volunteers. They don’t have to do it, and I can assure you there is an emotional cost for them as much as the rest of us when we attend the funeral of the fallen. I will never know how they can keep it together, but I am so grateful that they do,” remarks Brian Burks. Although we honor our officers throughout National Police Week, HCSO Honor Guard dedicates every week of the year to honoring those who have given the ultimate sacrifice while protecting their communities. Their example of gratitude challenges us to find ways to show our gratitude to our men and women in blue throughout the year.