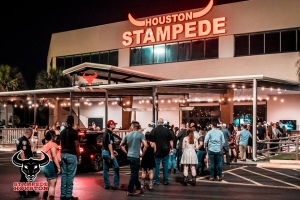 Houston’s two multi-faceted entertainment venues, Stampede and Escapade, draw crowds from all over the city looking for a lively, country western or Monterrey-style night. The two massive venues have stood side-by-side in the East Aldine District for the past 20 years, a project imagined by brothers Rob and Sirus Ferdows. “Both buildings were built with the intention of building a venue that would be a destination to come from all over Houston,” says Rob, a hope that has become a reality.

“It all started with my uncle, who always had a dream of having a kind of Casablanca,” remembers Rob. This desire led to the brothers helping their uncle open a country western club in Dallas, hosting stars such as Garth Brooks, until it eventually transitioned into a club catering to Dallas’ Hispanic community.

When the Ferdows brothers moved to Houston, they realized that starting a venue in the Bayou City meant catering to a different audience than they had previously experienced. Many of their Dallas clientele identified with southern regions of Mexico, while in Houston, many customers or their families are from northern Mexico. “It’s like trying to serve a Texan vs. a New Yorker. Very different cultures.”

In 2001, Escapade was constructed in its current location, a former abandoned plot of land that caused problems for the surrounding community. A business that bordered the unused land was forced to hire security to prevent break-ins, vandalism, and graffiti. Their luck changed when Escapade cleared the land and developed their facility, complete with almost daylight-grade bright lights projecting over their large parking lot. “Security is our number one priority. Our venues are extremely safe,” says Sirus, explaining that not one incident has occurred since their opening.

Established thereafter, “the East Aldine Management District has done a great job of making improvements in this area, cleaning up, and providing additional security. The district has redone the streets, sidewalks, medians; they’ve done a fantastic job,” adds Rob.

Five years later, the Ferdows brothers decided to expand Escapade into a second building. “There was an opportunity for the Spanish rock and pop genre,” says Rob. However, the demands of the quickly changing market turned their initial idea upside down. “The Spanish rock and pop movement died down, so we made a transformation. Country western was going through a rejuvenation right around that time, so we revamped the place into a country style venue.” Stampede was born. 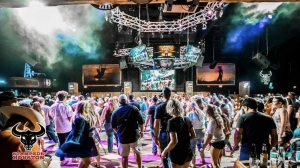 “We’ve been at this for 20 years now, and we’ve earned an outstanding reputation in the industry,” says Rob. Stampede has hosted country music icons like Cole Swindell and Gary Allan. In addition to the concerts and live acts, Stampede offers karaoke, pool, a large patio with games and big screen TVs, a 3,500 square foot dance floor where dance lessons are offered every Friday night, and, if you dare to try, the mechanical bull.

Bands such as Los Temerarios and Los Tigres del Norte are hosted at Escapade, playing a variety of regional Mexican music. Superstar artist Pitbull, Prince Royce, J. Balvin and other artists who have been featured in the Houston Rodeo have held concerts at Escapade. Various rooms within Escapade offer different experiences. “Our venue has four clubs in one. We have regional Mexican, Tejano, Latin rock and pop, and throwback music all in different areas,” explains Sirus.

As the venues are available for corporate and private events, they have been asked to host big-name organizations, a highlight of which was the New England Patriots football team. “We were asked to host the team before the Super Bowl in Houston,” says Rob. “They were looking for a venue that could fit 2,000 people. They called around, and got the recommendation to come to us. It was a very pleasant surprise.” 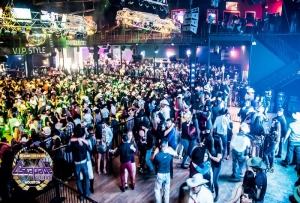 A highlight in their business career was being part of the relief effort in Houston in the aftermath of Harvey. Making use of their large facility and parking lot, they became a site for donations and volunteer mobilization. “Over 500 volunteers showed up by word-of-mouth. I was amazed. I don’t know how many trailers worth of stuff we gave out. We had thousands of cars coming through our parking lot. We are happy to be part of the community and do our share. It was truly an incredible, surreal feeling,” says Rob.

Whether the Ferdows brothers are getting people back up on their feet after a hurricane or just to dance on their dance floor, they want to use their resources to contribute to the East Aldine community. “One of our core values is ‘driven to improve.’ We want to make sure that we contribute in a positive way to our clientele and the community, and that’s what drives us,” says Sirus.