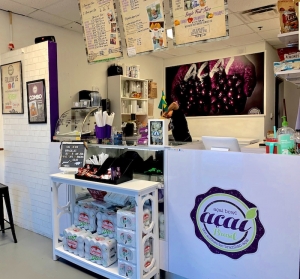 If you’ve ever lived or traveled abroad for an extended period of time, one of the things you miss most keenly from back home is your comfort foods. While those items might be available in foreign lands, anyone who has ever tried Polish Tex-Mex, a British hamburger, or even Colorado beef brisket barbecue will tell you those usually poor renditions of the tastes of home only serve to make you miss where you came from all the more.

Such was the case for Verena and Misrael Miranda, two Brazilians making their home in Houston and owning a business — Açaí Brasil — in East Aldine.

The athletic couple met in Texas — Verena got a job in the oil industry after coming to America on a volleyball scholarship, and Misrael is an instructor of jiu-jitsu, a discipline in which he holds a black belt. After some time together, Misrael, who came to Texas years after his wife, began to pine for his beloved açaí — the deep purple tropical palm-tree fruit eaten pretty much everywhere in Brazil morning noon and night.

Verena says that years ago, açaí was only eaten where it was grown: a single Brazilian state near the mouth of the Amazon, where locals eat it often unsweetened as a staple alongside fish and meat. From there it migrated to Rio de Janeiro — a “very fitness-oriented city,” Verena says — where “Cariocas” (as Rio natives are known) tended to eat it sweetened and with fruit added as a pre-workout treat / energy-boosting meal. Among the fruit’s earliest and most important evangelists are Rio’s Gracie family — a large multi-generational clan of jiu-jitsu masters. The Gracies sold the whole country on guarana-laced, banana-topped açaí and today it’s available at every corner store. (The açaí-jiu-jitsu bond is strong in Houston as well as Brazil — there’s the black belt of this store’s co-owner, and the fact that some of their products are available frozen in the shops of several area jiu-jitsu academies and training centers from Clear Lake to Sharpstown and even one as far away as San Angelo.)

So while in Brazil açaí is as easy to find as Coca-Cola in Brazil, that is not the case in Houston. But because Greater Houston is an international city, the homesick Mirandas did find açaí on a few scattered menus around town, but they were disappointed by each of these Americanized versions of the genuine article. “Hawaii was the first place to start making açaí outside of Brazil,” she says. “So what most Americans eat was adapted in Hawaii. What they make is cheaper but not as good.”

Frustrated, they decided to take matters into their own hands. After some training and practice, they opened Açaí-Brasil in East Aldine’s High Ridge Business Park, near the corner of Lee Road and Beltway 8. There they now serve açaí drinks, smoothies, and their trademark açaí bowls — a layer of açaí and other flavorings piled high with a wide range of fruits, grains, and other toppings.

As they put it, açaí bowls look and taste almost like ice cream but are dairy-free, unless otherwise specified. The berries are mixed with guarana syrup — like açaí, a tropical fruit energy booster — and topped with everything from bananas and strawberries to oatmeal and peanut butter to honey and condensed milk. Most options are vegan; all are gluten-free.

“It’s what breakfast dreams are made of,” reads their website. “After eating a bowl, you will not only feel happily full (for hours) and have satisfied a sweet craving (no need to cave for a donut), you’ll have also done something that was good for you. Win win.”

I tried one and I would have to say I agree — not only was the açaí at the bottom of the bowl delicious and not-too-sweet, but you could tell the Mirandas carefully select the bananas and fresh strawberries that topped my “Brazilian Style” bowl. The bowls aren’t cheap — prices start around $7 for a small and on up to $18 for the most expensive: the Carioca, a deep layer of açaí topped with honey and granola. There is a limited amount of outdoor seating in front of their small storefront, and the inner courtyard of the industrial warehouse park is surprisingly green and pleasant, given the large verdant retention pond in its center.

While I am not an açaí expert, some reviewers who claim to be on Yelp and Google rave about these bowls. Several call it the best açaí bowl they’ve ever had, one says it has ruined her for all other American açaí bowls, even the best in Miami; and a third reviewer simply calls Açaí-Brasil “the best-kept secret in the metro area.” As for the Mirandas, they love to dip into their own supply: Verena says Misrael eats açaí three or four times a day.

“The secret ingredient is just pure açaí, hard work and love for what we do,” Verena explains on their website.