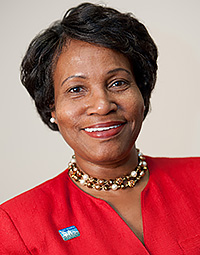 Well it’s the first year of a new decade, so it’s a good time to check in on some of East Aldine’s big picture trends and the economic development of the business community. Who better to check in with than Joyce Wiley, East Aldine District board member and chair of the District’s Business and Economic Development Committee?

Wiley spoke to our reporter about some of the boxes already ticked off the District’s to-do list and gave a general progress report on a few more goals she and the committee are working toward in helping East Aldine prosper and thrive in the ‘20s.

EAMD: Now that ground has broken on the district building, how is the economic development strategic plan shaping up?

Joyce Wiley: Yes, the construction project on the building got started on January 8, after the holidays. Weather permitting, we hope to have it completed by March, 2021. As for the plan, hopefully we’ll have it completed by this summer. Even though we don’t have the plan in hand, we’ve had several meetings on it, about what we’d like to see.  For example, one of the things that we’d like is to have a true inventory of what is in the area, what we have to work with when we look to expand growth.

We recently hired Michelle Morris as our Real Estate Consultant and she has given us an exact tally of all of the businesses, all of the strip centers, all of the raw land available in the community, and she finds out who the owners are and what their plans are and familiarizes them with the district.

JW: The Livable Centers Study is on schedule to begin in March. That’s a process. They go through the scoping in February, and the release of the request for proposal is in April, but it’s designed to kick off in August 2020. Again, it’s a process. We have budgeted our match for this plan.

EAMD: How are things shaping up for the arts on the district’s campus?

JW: In the Town Center we have a college and a high school and the Baker-Ripley Center, and we have a lot of talent there. In order to grow and expand the arts resources and culture in the community, we want to establish an Arts Council, so in the 2020 budget we have an allocation of seed money to get it started. The intent is for it to be its own council at some point in the future.

EAMD: I understand y’all recently attended the International Council of Shopping Centers convention. Could you tell us a little bit about what that is, and how the trip went?

JW: We recently came back from the Dallas convention. The intent there is to go and meet retail organizations that might be interested in expanding to new areas. We have our brochures that we exhibit to them, and in the past it has brought a couple of retail outlets to the community so we have our fingers crossed that we will continue to attract investors to the area.

EAMD: I hear that the District’s special events have been going well.

JW: We modified our event planner’s contract last May because the events that we are doing are getting so much bigger, and that’s a good thing, and we’ve scheduled more events, so we need more help. We are looking to expand that even more after the completion of our East Aldine building in the Town Center because we will have the amphitheater designed for events. So we’ll need even more event help.

EAMD: Where is that amphitheater going to be again?

JW: Right. And true to form the Town Center is becoming the nexus of the community. Hopefully we’ll get a few more retail outlets there to support the college and the high school students.  We still don’t know what those will be right now because we are still in the planning process but that’s what we’re hoping for.

EAMD: Well that dovetails nicely with my next question. I heard there’s a Joe V’s Smart Shop going in.

JW: No more names right now because the Joe V’s will take up a significant amount of space. Before Joe V’s we had unallocated retail space, but with it being so large, that’s cut down on the amount of space that we have. However, since the Town Center has been in, there are strip centers popping up all around it. I believe it’s the fact that we started the Town Center that has spurred that growth.

EAMD: Great to hear. Whenever I do one of these Q&As I ask a fun question at the end, and it’s always the same question. What’s your favorite restaurant in the area?

JW: There are lots of good ones but one I really like is Manny’s. It’s Mexican food and seafood, and it’s really good, and that’s where I meet with people all the time.