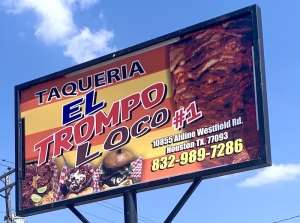 A hybrid taco truck / taqueria mix, and the original of three in the Greater Houston area, El Trompo Loco #1 offers spit-roasted / grilled tacos of a type brought to Mexico by Middle Eastern immigrants relatively recently — in the words of Texas Monthly taco editor Jose R. Ralat, they are far from some ancient Aztec mystery, but rather an innovation that took Monterrey and Mexico City by storm in the 1950s.

“Trompo” is Spanish for a spinning top of children’s toy fame, but in this sense it refers to a revolving spit on which meats roast over charcoal or propane flames. Fans of Mediterranean and Middle Eastern food will have seen them — they are the source of shawarmas, gyros and the like. Once the technique was brought to Mexico, it was Mexicanized, often with pork replacing lamb and mutton — pork, being taboo to both Jews and Muslims is rare east of Turkey (though not unheard of in Christian Arab communities) while lamb and mutton is harder to come by in Mexico.

“Outside of Houston city limits you can get meat that’s rotated on spits over actual fire or charcoals,” says local photographer and taco expert Marco Torres. “So it’s being charred on the outside; what they do is the roast it on the trompo and then they finish it on the griddle — la plancha, in Spanish. Some people like my dad will ask for their meat to be served bien planchada — that would mean they would want it crispy. 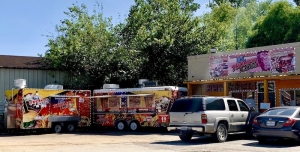 The tacos al pastor at El Trompo Loco come with thin-slices of red-ringed charred pork shaved from the trompo and finished on the grill. The trio of pastor taquitos on our plato mixto (with two beef tacos comprising the other half of the five-taco meal) arrived on corn tortillas grilled alongside both caramelized onions and the meat shaved from the spit, thereby infusing the key components of each taco with a unifying flavor of roasted marinated pigmeat. As with an increasing number of Aldine taquerias I’ve encountered, these tacos are served not with frijolies y arroz but rather tender roast potatoes. (I welcome the change.) Cilantro, diced raw onions and red and green salsa round out the splendid platter.

El Trompo Loco also offers mouthwatering papas asadas mixtos — basically roasted potatoes with cheese, meats and everything on top — Mexican-style hamburgers (here piled high with not just ground beef and sliced vegetables but also ham slices, gooey cheese and a pineapple slice), and piratitas (meat and cheese stuffed tortillas folded in half and grilled — something like a midway point between a taco and a burrito). 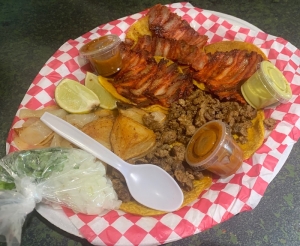 We missed out on those delights on our first visit but we shall return. El Trompo Loco will, as that 80s pop star sang it, spin your taste buds right round baby, right round, like a record baby round round… (Sorry for inflicting that song on y’all…)