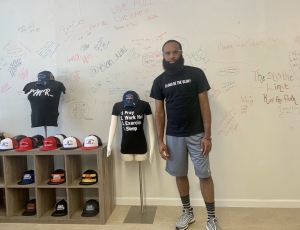 Vance Dixon is on a natural high as we roll up on him in his little strip mall community center at Charriton and JFK. The previous day had seen him hosting a voter registration drive, and among those who signed up to vote for the first time was Dixon himself.

“We had Rock the Vote shirts on and we had tables set up… One of the ladies I went to school with was like, ‘Hey Vance I want to do something with everything that’s going on,’ and she asked if she could use my space and I said yes. We had a tent out front, and we registered 38 new voters. Yes, we offered a free meal, but you have to do something to get something. To think, I was 34 years old and had never voted, but that’s about to change.”

We are in Dixon’s classroom-sized center seated at one of a few tables scattered about amid a wall open to the positive scrawlings of all and sundry, a sort of shrine to LeBron James (Dixon’s hero, he says unabashedly), and some of his t-shirts and hats. He is wearing one of those shirts now — plain black, bearing the legend “To God the Glory,” — and his prophet-like bushy beard almost obscures the message.

As far as his apparel line goes, one item has outstripped them all: ballcaps bearing the simple declarative statement of pride “Just a Kid from Aldine Mail Route.”

“It was just when I was growing up, I would hear about all the different areas in Houston:  Southside, Acres Homes, Fifth Ward, Spring, just different areas. And nobody ever mentioned Aldine Mail Route.  People would say, “Where are you from?’ and I’d say “Aldine Mail Route” and they’d say they’ve never heard of that.”

Dixon is all about putting Aldine on the map, literally. In the days of printed maps, some of those depicting Greater Houston would simply leave Aldine off the map, the better to run more verbiage and save on printer costs. 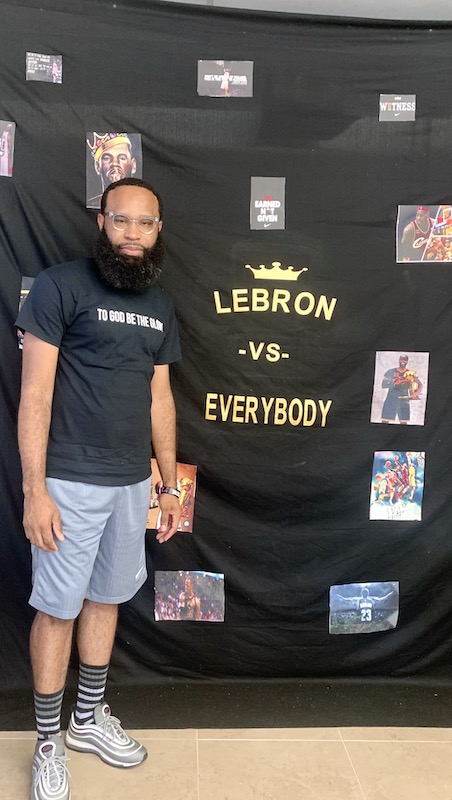 “My dad told me that and that’s what I was talking about when I was saying that I wanted to make this area more well-known,” says Dixon, 34, and a graduate of Oleson, Hambrick and MacArthur High School.  “People would always say they’re from different areas but nobody would say they’re from Aldine Mail Route, or when you told them that you were from here they would be like where are you from again?  Aldine Mail Route? No joke. Literally I mean it.  As I got older I realized that everybody is from somewhere, like some people are from the country, or wherever so I decided hey I’m just a kid from Aldine Mail Route.”

Dixon says sales took off from the second he posted a pic of one of his hats, resting on an ironing board, on Instagram.  “It was just gone from that,” he says. “Aldine may be low-income or however you want to frame it, but that doesn’t matter because it’s where you end up at the finish line.”

Dixon is just getting warmed up on a Sunday afternoon discourse:

“We do not have to travel the same path to get to the same distance. And sometimes, and I’m a little biased here, but when you take the path of most resistance, the difficult path, you learn more along the journey.  And I’m not saying that nothing is easy but if it is easy, you didn’t learn anything.  I need the harder path, where you make mistakes and you learn something, that’s when you really feel like you just accomplished something. I put my blood sweat and tears into this and I’m very proud of it.”

I asked him about his worship of LeBron James — there’s a slogan reading “LeBron vs Everybody” prominently displayed in the center.

“If I said I was a huge LeBron fan that would be an understatement,” Dixon admits. “ I even went up to Akron to see him play. I admire everything about him.  Imagine you’re 16 years old, famous already, inner-city kid, all types of people coming at you from all types of ways…  Financial, all types of ways… And he made it this far?  The only thing he’s ever done wrong was some of the wording the ESPN special. Other than that, everything along the way, even the lady he was with since high school… LeBron is a family man.  A role model, giving back, just everything.”