In the first installment of our three-part history of Aldine from last year, we discussed all the name changes the community went through before settling at last on its name, our best guess as to the origins of that name, and told you about some of the area’s earliest settlers — Swedish farmers and Kansans dreaming of escaping their harsh climate and seeking their fortunes with Texas fruit orchards.

Most of that action took place from roughly about 1870 to 1900, coinciding with the arrival of the International & Great Northern Railroad. It was that railroad that brought about the first of two name changes — from Greens (after Green’s Bayou) to Prairie Switch — and it was that railroad that delivered the Kansans to the place we believe they decided to call Aldine.

A recent trip to the Houston Public Library’s Metropolitan Research Center downtown uncovered a fascinating earlier chapter or two of Aldine’s history, one of which hides in plain sight to this very day.

That would be the Schlobohm Cemetery, final resting place of Texian hero Johann Friederich Schlobohm, the German immigrant and Battle of San Jacinto veteran who one of the very first non-Native Americans to live in what is now known as Aldine.

Designated an official historic cemetery by the State of Texas, a marker placed on the site 13 years ago tells the story of both the graveyard and its namesake: 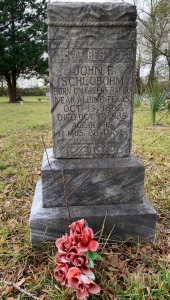 “This historic family burial ground marks the homestead of a veteran of the Texas revolution and early settler of Harris County. Johann Schlobohm (1807- 1882) was born in the Hanover region of Germany, and was in New Orleans by March 15, 1836, when he enlisted in Zavalla Guards, 2nd Regiment Volunteer Infantry. His group arrived in Galveston before the battle of San Jacinto, and after the battle they were placed as guard over Mexican General Santa Anna. Johann (John Slaburn) continued to serve in the Texian army in Company D, First Regiment, Permanent Volunteers from April 1836 to November 1837.

Schlobohm married Charlotte Caroline Kleibrink (1823-1886) in 1850 at the home of his neighbor and comrade-in-arms Peter Dykeman. In 1856, the Schlobohms bought 82 acres along Greens Bayou and built their home here, expanding their farm to 246 acres in 1858. The family cemetery began with burial of their daughter Fredericka in 1873. John and Caroline had eight children; six of them are interred here with their families and descendants. A quarter-acre of land was officially dedicated for the family cemetery in 1895, and expanded eight years later to a full acre. Members of the Schlobohm and Nicol families were caretakers of the graveyard for many years. At a family reunion in 1988, descendants formed the Schlobohm Cemetery Association, which has since maintained the property.

At least ten veterans are buried here, including Confederate veteran John Milton Morin and those who served in both world wars and later conflicts. Granite, marble and bronze grave markers are prominent. The 82-acre homestead was still forested and undeveloped in the early 21st century, 150 years after the Schlobohm family settled here.”

So how cool is that? Aldine’s likely first documentable settler was a man who fought under Sam Houston, Mirabeau Lamar, and Juan Seguin at a battle that tilted the course of North American history forever, and then, in its aftermath, went on to stand guard over Santa Anna, one of the western hemisphere’s most infamous 19th Century men. Pretty cool. (Note: early Texans were incapable or unwilling to spell out Schlobohm’s German name correctly, so if you are researching him, it is rendered variously as Slayton, Slaburn, Slighton, Slader and many other variations.) 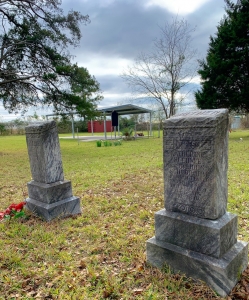 Schlobohm anglicized his name to John, and then named his boy after himself, and on that son’s grave is carved “born on Greens Bayou near Aldine, Texas, October 19, 1853.” That inscription was made on the younger John Schlobohm’s death in 1935. By then, Aldine had been known by that name for several decades, but certainly not the 82 years of John Schlobohm Jr.’s life – he was born near Prairie Switch and died near Aldine even though he was in the same place all along.

Schlobohm descendants still use this cemetery for burials and less solemn family gatherings. Last year a Youtuber going by “Willy Mammoth” made two cool little short films of the cemetery, complete with aerial drone footage. One is a bit melancholy and the other features a rockin’ little Easter egg hunt.

Though the cemetery itself is still lined by oaks and spiky palmettos and dotted with gnarled old juniper trees, the graveyard’s vicinity is no longer quite as “forested and undeveloped” as it was in 2007. Even so, it’s still a little tricky getting there: if you are heading north on JFK from Lauder Rd, you turn right on an unnamed road just past the under-construction fulfillment center on your right. (There’s a sign for “Kennedy Greens South.”) Take that road until you see a couple of chemical storage tanks and hang a left on the gravel road. That road takes you to the historic cemetery.