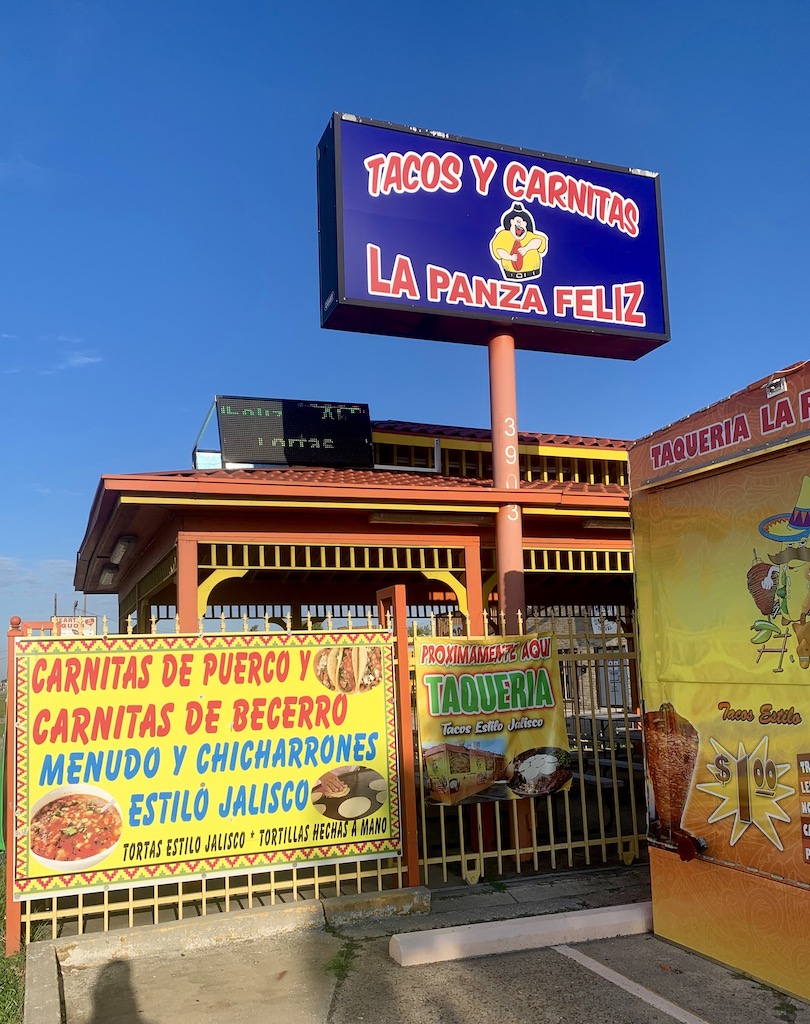 Well, this is one of those places where the name says a lot but not all. Yes, you can select from a wide variety of tacos, and they take justified pride in their carnitas de cerda, but that is not all that is on the menu at this cheery, hyper-authentic Aldine Mail Route taqueria.

Panza Feliz is festively painted in bright yellow and bold orange, its interior adorned with an array of painting presenting typical scenes from various Mexican states. The focus here is on Jalisco, birthplace of tequila and mariachi, and something like the Texas of Mexico. As Gustavo once wrote of tapatios (Jalisco natives), they are “an arrogant, brilliant, overly patriotic group that government officials romanticize as the id of the national psyche, and whose societal characteristics and traditions became easily identifiable stereotypes to the rest of the world.”  Arellano went on to point out that the wider world’s stereotypical Mexican — a heavily mustachioed man who wears big sombreros and loves tequila — is more accurately a stereotypical tapatio. Jalisco was the Mexico government officials liked to showcase to the world via films made in the 1930s, and so outsiders came to associate its culture with all Mexico. It’s carried down to modern times — who embodies Mexico more than ranchera king Vicente Fernandez? (I’ve always thought of him as Mexico’s George Strait, a singing cowboy in slightly different attire — there’s that Texas-Jalisco connection again.) 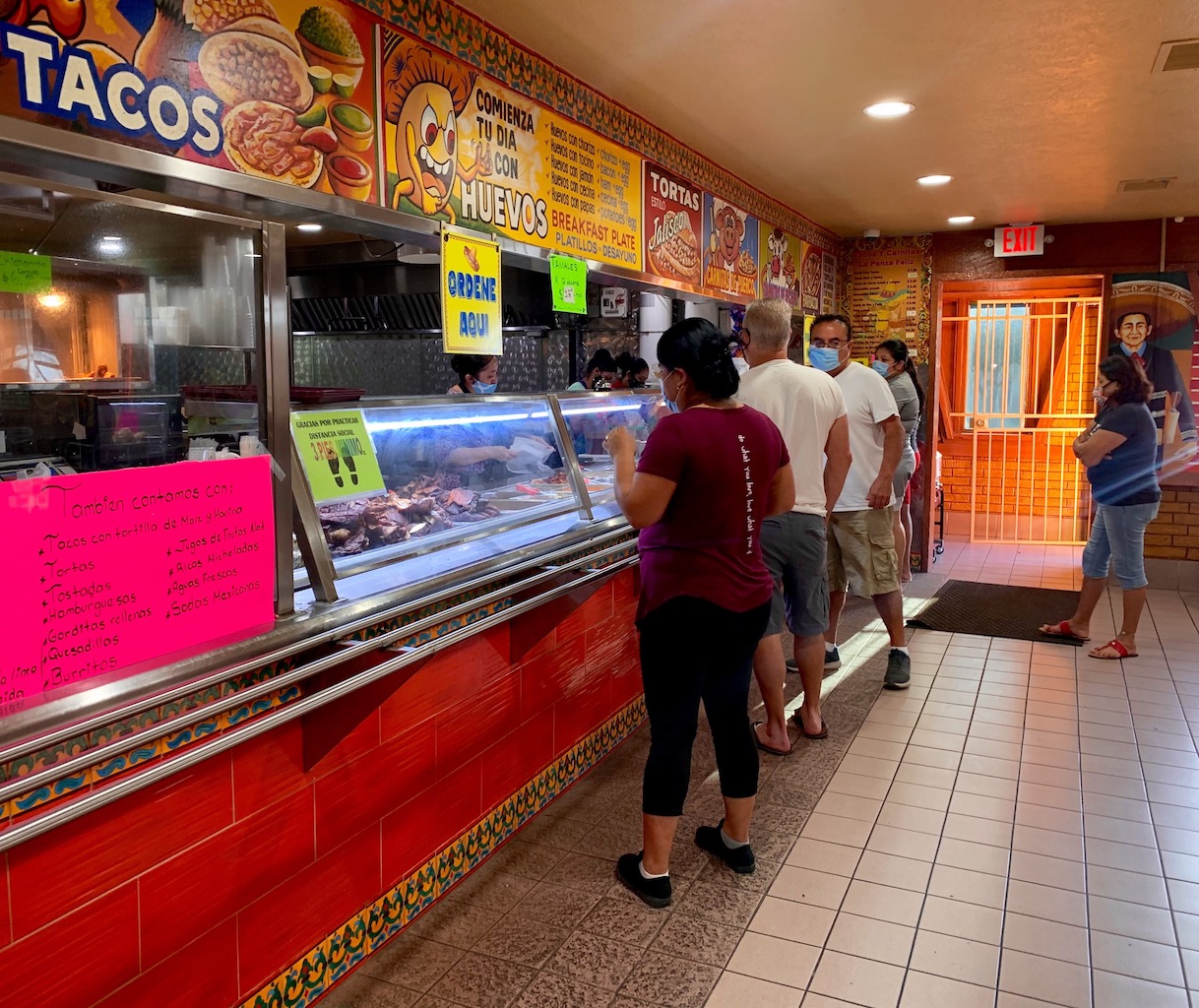 And then there’s the cuisine for which Jalisco is famous and which can be found here at the “Happy Tummy,” a loose translation of Panza Feliz. Of course there are carnitas, and here they were served unlike any this gringo has had before — lots with skin still on rather than my accustomed chunks of subdermal meat. I’d expected the skin to bring an unwelcome chewiness to the carnitas, but it did no such thing. The barbacoa was amazing, juicy and flavor and just the right level of tenderness. Word to the wise — unless you specify, you will not receive tortillas,  or trimmings with you meats, so make sure you speak up if you want or need the extras. I did not, but made do with just the smoky, complex and spicy salsa provided, and the meat was flavorful enough to not need too much adornment. And I am low-carbing it, or trying to anyway, but that diet ran afoul of Panza Feliz’s delectable big fat tamales. I was helpless against both chicken and pork varieties, so it added a few extra miles to my next bike ride. 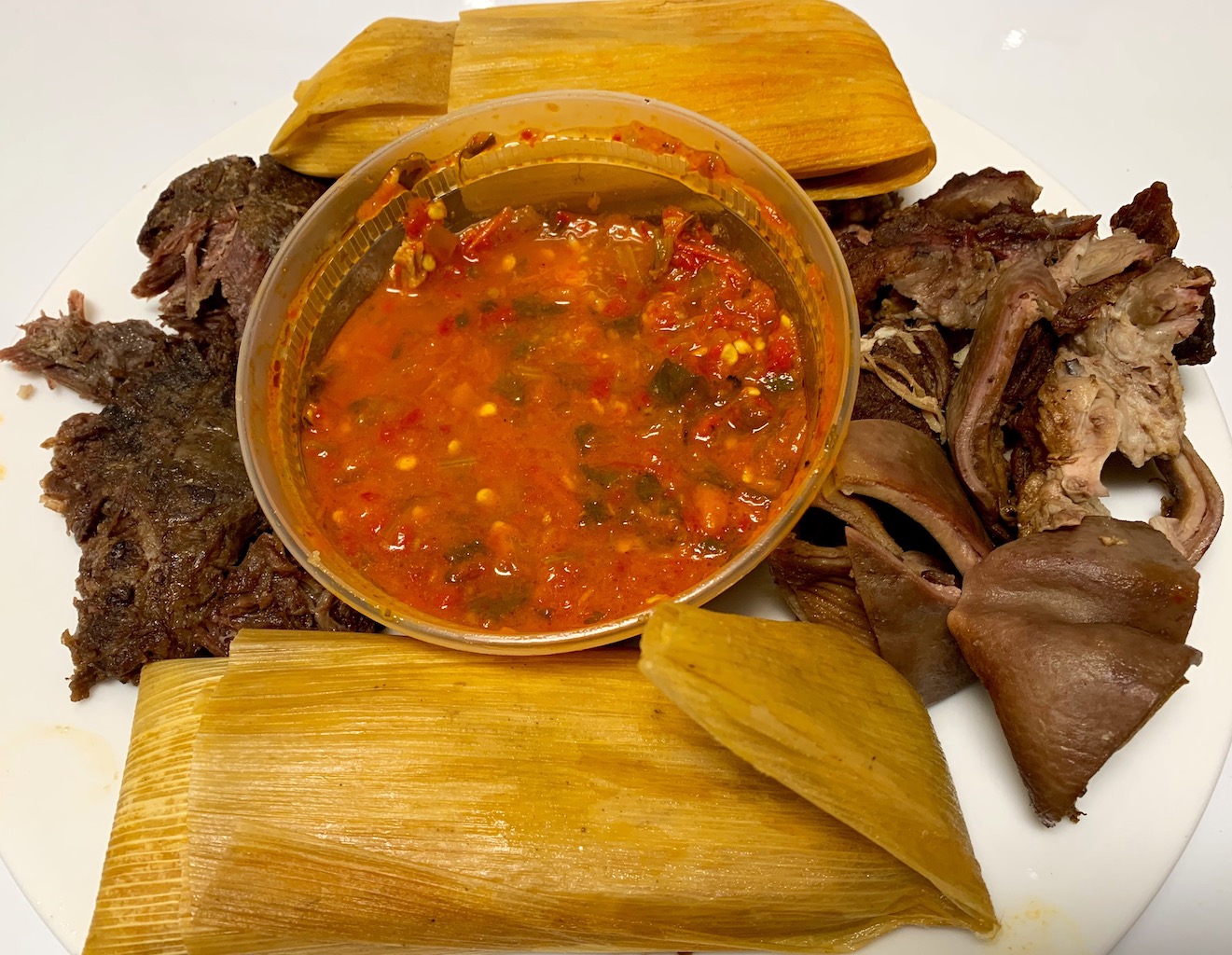 We mentioned there was much more than carnitas and tacos on offer there, and as you might expect from a Jalisco spot, birria is featured prominently on the menu and also Jalisco-style chicharrones, caldos, breakfast tacos, micheladas, pozole, and pupusas, in a nod to El Salvador.  Service is cafeteria / La Michoacana style, so if your Spanish is shaky you can point and rub your soon to be feliz panza.