Houston Hog Removal came to the rescue at Keith-Wiess Park

Home/Community, My East Aldine/Houston Hog Removal came to the rescue at Keith-Wiess Park

Houston Hog Removal came to the rescue at Keith-Wiess Park

City parks need upkeep. Especially when they get torn up by wild hogs.

The feral beasts were the problem at Keith-Wiess Park that led the East Aldine District to one of Jeff Baker’s businesses, Houston Hog Removal. Because the district and the city are non-profit operations, Baker donated his crew’s time and effort to round up the troublemakers — even when two of his best trained dogs were killed in a showdown with one of the largest boars.

Feral hogs are frequently a dangerous menace in rural, semi-rural and suburban part of Texas. In neighboring Chambers County, a woman was attacked and killed in 2019 and investigators believe the attackers were feral hogs.

But their most common kind of mayhem is tearing up fields and lawns in their search for worms and roots to eat. After that happened at the park in Aldine in the spring, a District staffer contacted Baker’s always-on-call crew.

Baker said he and his workers went to Keith-Wiess and set up reinforced cages baited with sour corn, which hogs like — and deer don’t. They also set up cameras that monitor activity in the trap and transmit images to a cell phone app.

When the app showed hogs in a cage, it was used to — BAM! — close the door behind them. In one instance, 23 were inside a cage at the same time.

The crew eventually captured a total of 36 hogs from the park, with the biggest one weighing 280 pounds.

Some of the others were captured by the dogs. Baker sort of got revenge on the boar that killed the two dogs.

“He’s on my wall now,” Baker said, meaning its head was preserved and mounted as a keepsake.

In fact it was Baker’s lifelong interest in hunting, and his operation of a construction business, that led to his creation of Houston Hog Removal.

In the course of working on land for construction, Baker realized feral hogs were a nuisance to property developers.

“I sort of started trapping (the hogs) and realized there was a market for it,” he said.

What happens to the hogs after they’re incarcerated?

Baker said he gives them away to friends and acquaintances for them to kill for meat. Sometimes he slaughters the hogs himself. He’d donate the animals to organizations that provide food to the needy but they usually won’t accept wild game meat, he explained.

Some of the hogs his crew caught in Keith-Wiess Park had been caught before, castrated and returned to the wild, by unknown nearby residents, according to Baker. That practice leaves the animals still able to cause damage.

His advice to people who take their pets to the park?

“Keep your dog on a leash,” Baker said. “(Otherwise) if the dog goes over to the hog, it doesn’t know what’s going to happen.”

Burks contacted Baker after people who live near the park had spotted the hogs.

“So many of our constituents use this beautiful park on a daily basis and we were fearful that sooner our later someone might be injured,” Burks said. “We were thrilled to learn from Jeff that he was only too happy to help us, and he graciously waved all fees for his efforts which I must say turned out to be monumental. 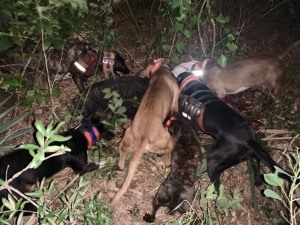 “Hog removal is an extremely labor intensive effort! We hope to introduce Jeff and his team to the board of directors in person once normal public meetings commence,” he added.

The crew may be back at work in the park soon because some younger, smaller hogs have been spotted there.

Feral hogs ramble for food mostly in the dark, late at night or early in the morning. And in most City of Houston parks, they have not been reported as a problem, a spokeswoman said.

Houston Hog Removal has used helicopters to shoot feral hogs in rural areas, but it’s not the outfit’s specialty.

“We specialize in catching these pigs in areas where you can’t just go out there and shoot them, you kind if have to use discretion — hospitals, schools, businesses,” according to Baker.  “A lot of people in the populated areas rely on us . We know what not to do, and in most instances try to operate without people seeing us.”