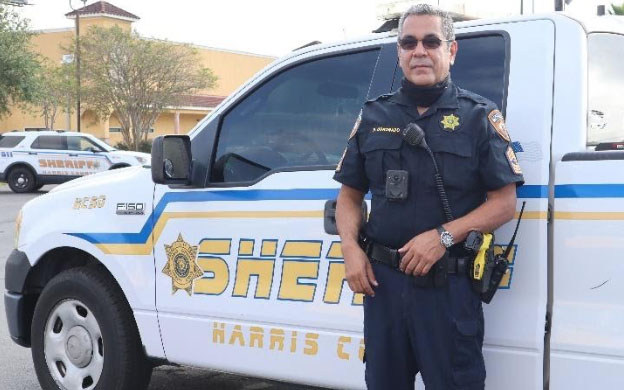 There is a new sheriff in town — well, sort of. We had a chance to get to know the new Harris County Sheriff’s Office day shift patrol sergeant for District 2, which includes East Aldine: Sgt. Raymundo Coronado.

Coronado was born in Monterrey, Mexico and migrated to the United States with his family when his was 2; first to Illinois and later making the move to Houston. He attended school on Houston’s southeast side and earned a bachelor’s graduate from the University of Houston He became a U.S. citizen in his early ’20s.

The sergeant first joined the Sheriff’s Office in 1991. He is a fluent Spanish speaker.

What are the responsibilities of your new assignment?

“I oversee deputies assigned to patrol the District 2 area during the daytime. When there is a major scene involving our agency, you’ll probably see me there. Basically, I check officers in. I review offense reports, I review crash reports. I do payroll. I do administrative stuff. I go to any large (the most important crime or crash) scenes. I still participate in patrol, when needed.”

Why is a role like yours important in the patrolling process?

“This person oversees the street (patrol) officers, who are the first responders. We mentor officers. I have been around over 25 years and have knowledge in various areas of law enforcement. I have worked the jail, booking/releasing, immigration, patrol, administration and investigations. We must keep our skill set up and continue training because it makes you a better officer.”

How can the business and citizens of the Aldine area support you in your new role?

“I encourage them to report suspicious activity and criminal activity. Don’t worry if you don’t speak English or you are concerned about immigration status, just call. We will go to investigate and take due course of action. We want the public to feel comfortable in reporting incidents to us. They can report emergencies to 911 but they can reach us about non-emergencies at Central Dispatch at 713-221-6000. We have some great officers patrolling the area.”

Your officers work closely with this community. Are there any activities or events that the officers participate in on a regular basis?

“Yes. Every Thursday our officers assist in the food distribution at Stampede Houston 11925 Eastex Fwy, A). One of the local church groups hands out the food. Also, currently, the first Wednesday of every month, we assist BakerRipley (3000 Aldine Mail Route Rd). They are also having food distribution during the pandemic. I am not sure exactly how long that event will continue but we are there to help.”

Will people see changes or anything new coming from you in the new leadership role?

“Well, I have only been in this role for three weeks, so I am still looking and learning more about this community. I am looking forward to knowing as much as I can and making this a better district while keeping our officers safe.”

When not working, this father helps raise his two children, one of whom has special needs. As an immigrant with English as his second language, Sgt. Coronado feels like he can relate to the needs and struggles of people within his patrol area.

Congratulations Sgt. Coronado on your new role and welcome to East Aldine.