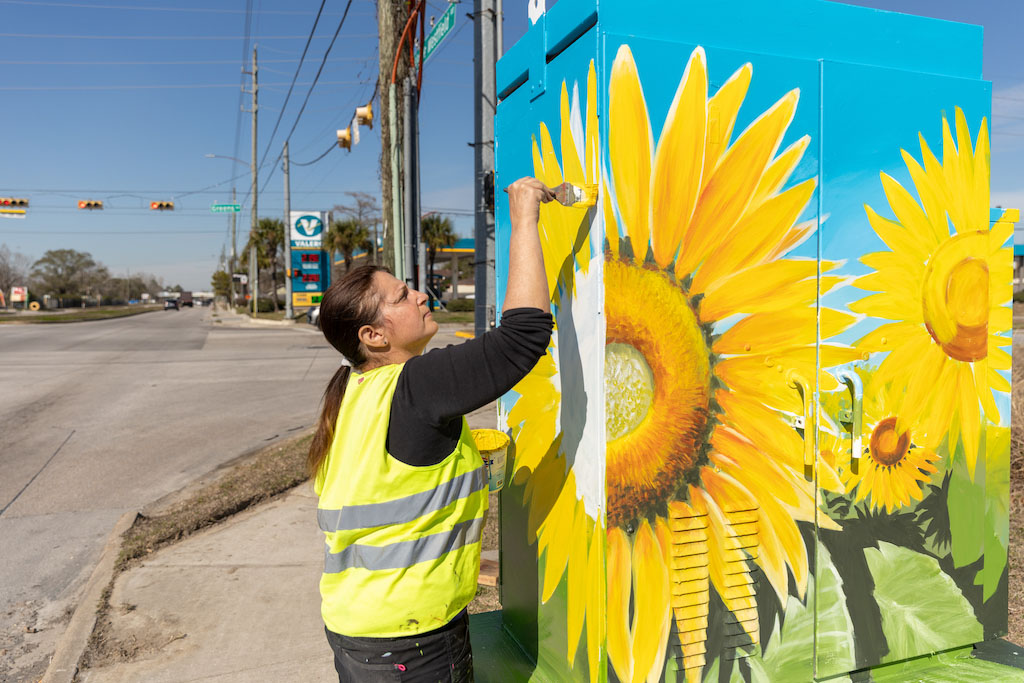 A pleasing touch of moonlight, flowers and sunshine came to East Aldine just in time for Valentine’s Day.

But the feel-good objects won’t fade away like the holiday. They are permanent neighborhood decorations known as Mini Murals, which are hand-painted and clear-coated on traffic signal control cabinets at two key traffic intersections where Aldine drivers, passengers and pedestrians can enjoy seeing them day after day.

They also signal exciting steps by the East Aldine Arts Council and the East Aldine Management District to bring more public art to the area. The district funded creation of two Mini Murals by Houston-based UP Art Studio, which has enlisted artists to create more than 315 street-level, outdoor Mini Murals across Houston. Also coming soon: A unique, sweeping mural, documenting the history and cultures of East Aldine, in the management district’s new East Aldine Town Center. 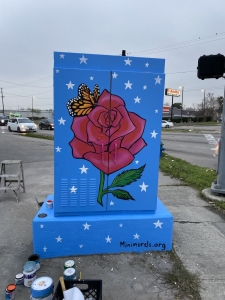 Elia and Noah Quiles, a married couple, founded UP Art Studio in 2012 to put more art where people can enjoy it, for free, in public spaces. They recruit artists who create the Mini Murals, while Noah has evolved over many years from creating graffiti in his hometown Chicago to removing anyone’s attempt to deface Houston’s Mini Murals.

Artist Anat Ronen painted sunflowers on the metal traffic signal box at Aldine Westfield Road and Greens Road. Artist Sylvia Blanco painted the sun and moon on such a box at Westfield at Little York Road and created a rose image on the other side. Both images were part of a menu of choices from which the Arts Council picked to brighten the area.

“We knew that we wanted to start our art initiative in the district with a pair of Mini Murals,” said Carlos Silva, a management district board member and a driving force for the district’s Art Council Committee. “It was the perfect way to quickly show residents how art can have an impact in beautifying our community.   This in turn helps to grow the collective sense of pride for the area which is really something the Arts Council is committed to doing. These Mini Murals are a wonderful stepping stone for more art in the public sphere here in East Aldine.”

Across Houston, the hundreds of other UP Art Studio Mini Murals include images of political figures, plants, sports teams, entertainers, animals, butterflies, birds, gardens, crayons — the list goes on.

Some Mini Murals not only show iconic people and places, but also become gathering places themselves. When U.S. Supreme Court Justice Ruth Bader Ginsburg died last year, a Mini Mural in the Houston Heights depicting her and three other women who served on the court became a crossroads where her admirers left flowers and other memorials.

The art pieces also generate community loyalty. After a Mini Mural portrait of Pakistani activist and Nobel Peace Prize winner Malala Yousafzai was defaced (and cleaned later) in the nearby Oak Forest neighborhood, a resident trained his home security camera on the Mini Mural to prevent any further vandalism. 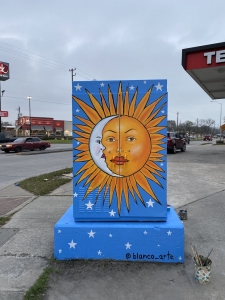 Mini Murals became popular in Houston after the Quiles pair project-managed a more conventionally sized mural in 2014 — one that aimed to be the city’s biggest at the time. After the mural earned many compliments, they dove into the world of Mini Murals and swiftly gained approval from Houston Public Works to use utility cabinets as canvasses.

Council Member Larry Green, who has since died, created a higher level of public enthusiasm for the project when he funded dozens of Mini Murals for his far south/southwest district.

“The media went crazy,” Elia Quiles said. “We’d created more public art outside the loop than the city had in it is entire collection.”

Eventually UP Art made a connection with the East Aldine Arts Council when the company was commissioned to create murals promoting full participation in the 2020 Census. One of the murals went up at High Meadows Branch Library near Aldine ISD’s MacArthur High School.

For UP Art Studio, the sky — or the curbside — is the limit. The Quileses have created Mini Murals in other Texas cities and are expanding into working with cities to develop and execute comprehensive plans for public art.

Meantime, in collaboration with the city of Houston, UP Art has put out a fresh call for more artists who will be paid to create mini-murals.

As for East Aldine, the Arts Council is planning more public art projects now that the district’s two Mini Murals are in place and drawing positive reactions from the public.

“We’re really only just getting started,” Silva said. “EAAC has big plans for 2021 including commissioning a large scale sculpture and an outdoor mural that both residents and passerby’s can see and enjoy. Not to mention more Mini Murals!”