On the Art Bus, kids go where their creativity takes them

Home/Community, My East Aldine/On the Art Bus, kids go where their creativity takes them

On the Art Bus, kids go where their creativity takes them 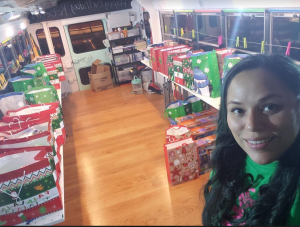 The story of the brightly painted, 30-foot school bus known officially as “The Art Bus” is, in a way, not unlike the story of 2020. If something could go wrong, it did.

Not unlike that terrible year, however, the 8-month history of The Art Bus is also a story of passion and persistence through a pandemic that challenged a community. Now, in a way, the Art Bus is an answer to some of the bad feelings the pandemic brought.

The long-time dream of owner and artist Ronnie Cabrera, the bus was first used to deliver groceries, supplies and Christmas presents to Northside-area families. That was before the 33-year old mother of four active boys was able to transform the vehicle into a moving art studio.

Cabrera first started drawing as an elementary school student at Our Lady of Guadalupe Catholic Church school. As a youngster being raised by her grandmother, Ronnie remembers “getting into trouble” for drawing or painting on furniture, or walls, or whatever else was handy.

“I absolutely loved it,” Cabrera recalls. “Art became my passion.”

She recently brought the Art Bus to the East Aldine Management District’s holiday toy drive-through celebration, handing out Christmas craft supplies to kids. She and her husband, Norberto Moreno, live just outside the district. They frequently bring their boys to Keith-Wiess Park.

Cabrera first attended the High School for the Performing and Visual Arts in the Houston Independent School District, then transferred to what was then called Jefferson Davis High School, where she met and fell in love with Norberto. They married when she was just 18.

“For a little while, I thought my dream of being an artist was over, when I was a very young mother,” Cabrera says. Norberto Moreno knew it was not.

“I wouldn’t be doing what I am, if it weren’t for him,” Cabrera says. “I remember him saying, ‘You’re still the girl I met in high school who loved art and wanted to bring it into the community.’”

She soon found that her artistic talents were needed for her boys’ school festivals, where she painted all the signs. Then, she started staffing face painting booths at school events. She even became a regular “face painter” at the Houston Zoo.

At first, they also built an art studio behind their house, where Cabrera started giving art classes to neighborhood children. Then, she decided to go to local flea markets and set up a booth with art supplies for children. In the back of her mind, she envisioned buying a mobile art studio to take art into schools and the community.

In early June, 2020, the couple were driving home from a shopping trip and passed a house with two school buses in the front yard. They were for sale.

“Norberto said, ‘I think I’m ready for your art bus,'” Cabrera says. “He said, ‘There’s something inside me, I don’t know if it’s God, or what. But you need that bus.’”

The next morning, they got up to go buy a bus. Cabrera’s car had been stolen right out of their driveway. They took an Uber to see the owner of the bus.

But, a very large tow truck took the bus to a nearby mechanic, who fixed it.

“He towed it for free. And he didn’t charge me an arm and a leg to fix it,” Cabrera said.

She posted a photo of her “dream” on Facebook, explaining that she was going to rip out all the old seats and turn it into an art studio. That’s when the couple’s four teen-age boys came in handy.

Then, an old classmate from Our Lady of Guadalupe made a generous donation toward the Art Bus. He suggested the creation of a “Go Fund Me” account. And, he set up an equipment “wish list” on Amazon. 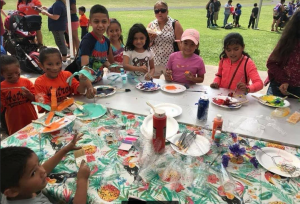 “My stomach was churning, I didn’t want to do that (ask others for money) while people were struggling to put food on the table. How was I going to justify that? And then, the response was insane. People were just very, very generous,” Cabrera said.

“People just kept telling me they wanted to see this happen,” Cabrera said. “I’m just a person who grew up in the neighborhood who wants to bring art to the kids. The response has been overwhelming.”

With such positivity, Cabrera has been asked to start art classes at the Attack Poverty North Side location a 15-minute drive from East Aldine. Free classes, at 1913 Fletcher St., will start in mid-February.

Cabrera recognizes that children are going through a difficult time during the pandemic. The classes will offer a creative outlet for them. The lesson plan Cabrera has developed is titled: “Identifying Emotions Through Art History.” The children will be allowed to express their feelings through a variety of art media, Cabrera says.

The moveable art studio has been adapted for social distancing, with a fan and windows that open.

People of all ages have found that creative outlets — from baking bread to learning to crochet — are great ways to relieve stress during these difficult times, Cabrera said.

“Somehow my dream came to life during this pandemic,” Cabrera added. “It took my entire family, it took this entire community to get it going.”