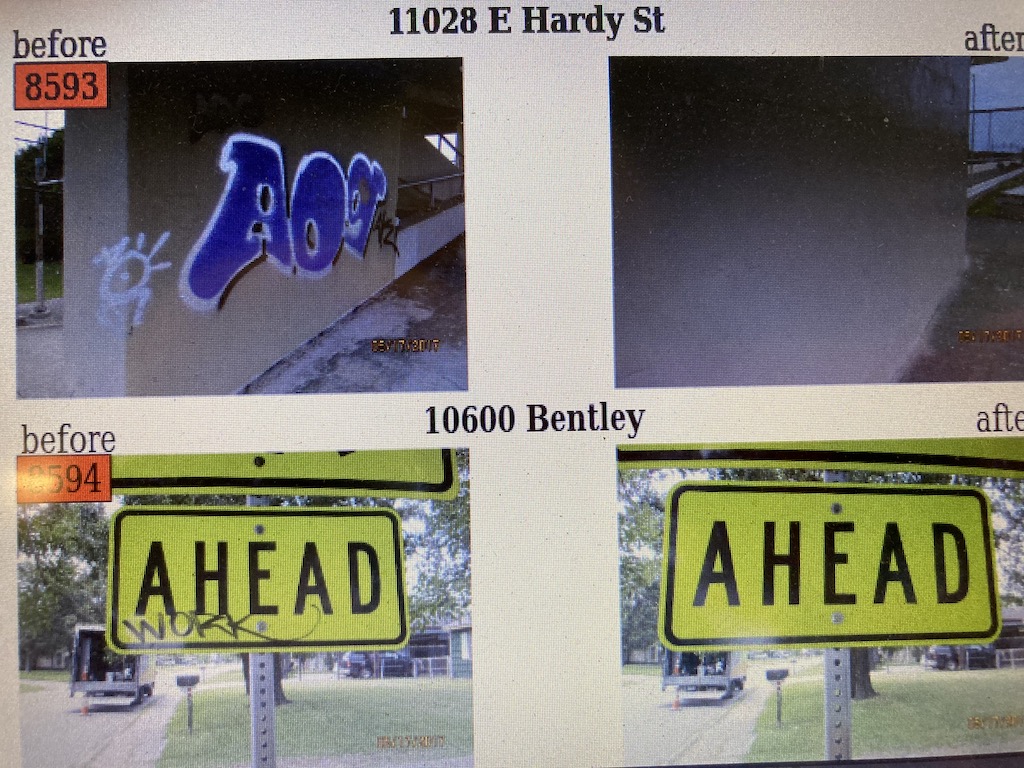 In every major city, wherever there is an empty wall space, one might find the not so special artwork of graffiti casting a blight on the surface. While some may think of it as wasted artistic talent, this type of nuisance and eyesore can pose a threat to public safety, or even subject an area to increased vandalism and crime.

“The graffiti abatement program provides an invaluable service to the district as it helps keep the area clean,” Cantu said. “Having graffiti-free businesses and neighborhoods helps build pride in the community. Keeping the district clean helps attract businesses and encourages more economic development.”

Much of the graffiti these days is tied to gang activity, so it is more than a beautifying measure, it is in reality a matter of public safety.

As often as needed, Chavez’ team brings a truck into the area with a variety of 60 colors of paints and special solvents to eradicate graffiti art and “tags.”

Taggers learn quickly that their work will be removed and that deters them from returning. It is also reported to area law enforcement.

“The graffiti removal team does such an excellent job of removing it quickly, and that is important, because if the (taggers) do not see it up, or if it doesn’t stay up, they will not bother to do it again,” explained long time East Aldine Management District business owner Bob Beasley.

“I am in my 49th year of business here and I like that this area has no graffiti because it doesn’t stay up,” Beasley added. “The graffiti doesn’t even stay up long enough to file a report, because the team is on the lookout and removes it so quickly.”

Forms are available online at the  Management District’s website to report graffiti, and reports of completed abatements can also be found there, along with before-and-after photos. Business owners can also call in a report.

“I think the team does a very good job,” Beasley said. “When it was removed from one of my buildings, the color matched well.”

Martin Chavez, director of operations for East End Management has been overseeing the graffiti abatement team since it began 20 years ago.

“We do this service for multiple management (or improvement) districts, and for the City of Houston and the City Parks Board by contract, and we perform this service according to the amount of need in each area,” Chavez explained.

He is proud of the work his teams do in matching paint color and in restoring the surface to what it was before the graffiti incident. From brick, to stop signs, to painted surfaces, they try their best to do an exact match by using a “tint” machine to make sure paint colors match.

“It’s important that it looks good after we finish,” Chavez said.

For forms, or more information visit the district’s website at www.aldinedistrict.org