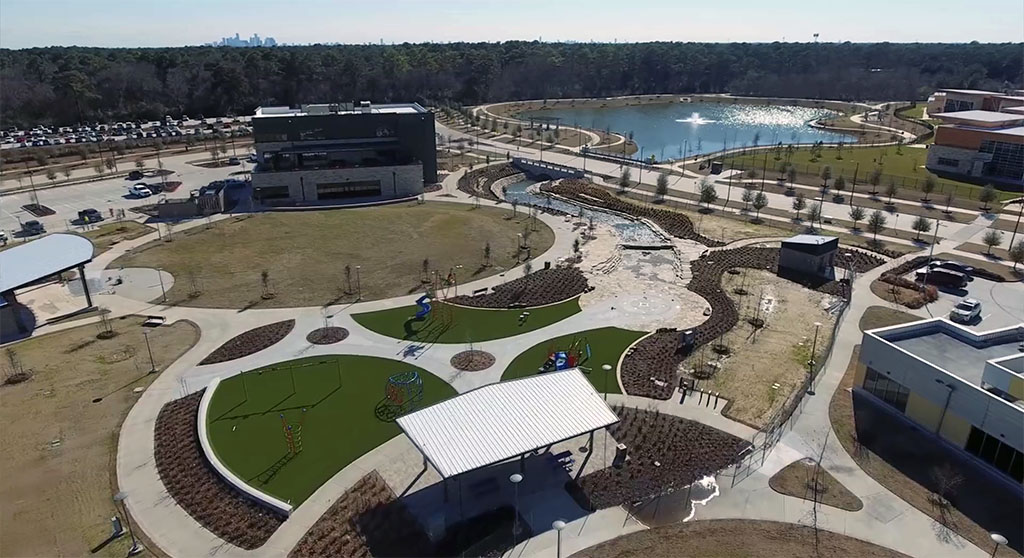 Before building a new Town Center, officials of the East Aldine Management District literally had to move mountains. Or at least one very large mound.

For years, the 61.6-acre tract of land at 3000 Aldine Mail Route Road was used to hold tons of dirt excavated from areas of Harris County for the construction of flood control and detention ponds.

But now the District will soon officially open the second phase of the Town Center — a three-story, 30,000 square-foot office building, with space for community meetings, surrounded by a rolling green lawn and 1,500-seat amphitheater for public celebrations, concerts and cultural events. There will also be a splash pad and a “lazy” river,” with a pretty flood detention lake and new access to nearby Keith-Wiess Park.

Together the additions will create an attractive community crossroads that enhances the area’s sense of identity and activity.

Already, a BakerRipley non-profit service center and a Hope Clinic community health center operate in the original segment of the project, with a Lone Star College branch and the Harris County Sheriff’s Office Call Center as neighbors.

The Town Center has been almost a decade in the making, and will provide synergy for the economic, educational and entertainment needs of the vibrant East Aldine community.

“I really think the Town Center will be a real game-changer for future growth in the Aldine area,” said Bob Beasley, a District board member. “I think it’s going to be a tremendous source of pride for the whole community. And I think it will give the Aldine area a sense of identity it hasn’t ever had before.”

Gerald Overturff, 82, is a life-long resident of the area and offers a unique perspective on the area.

“All we used to have out here was pigs and pig trails. That really is all we had out here,” Overturff, the District board chairman, said with a chuckle. “I think we’ve come quite a long way myself.”

Overturff has kept a check list of the millions spent on construction on the project, which was managed by TLC Construction Contract Services and PGAL project engineers in cooperation with the district staff.

He is quick to point out that all of the costs of the Town Center and the surrounding development have been financed by the people of the Aldine community.

“Every time you spend a dollar at Burger King or the hardware store, you’ve paid a tax that goes to support the district,” Overturff said. That’s why he wants residents of the area to think of the Town Center as “the peoples’ town center.”

The District hired the award-winning landscape architecture firm of Clark-Condon Associates. During it 35-year history, the firm has been involved in projects ranging from the redevelopment of Bellaire’s Town Center to the famous Texas-shaped swimming pool at the Marriott Marquis Houston hotel downtown.

Next, plans call for the development at the Town Center for 100,000 square feet of commercial development to boost economic development in the district. District officials are having a hard time keeping the big “secret” that a Joe V’s, a community grocery store operated by HEB, is coming to the commercial tract.

In response to development of the Town Center, private development has already taken place across the street with the addition of a convenience store, gas station and a string of shops.

The East Aldine district’s mix of residential neighborhoods surrounded by stretches of undeveloped semi-rural real estate is located just 15 minutes by car from downtown Houston. But the 20-square mile District is in unincorporated Harris County and it has long needed basic infrastructure improvements. To encourage the development of the area and enhance public safety efforts there, the Texas Legislature approved the creation of the District in 200. Voters approved a 1-cent sales tax to fund it the next year.

The area’s quirky blend of properties serves as a magnet for residents who moved away and now, happily, find their way back home.

“There’s something about it,” said District Deputy Director Richard Cantu. “People are always moving back home to East Aldine. Maybe it’s that you can be so close to the nation’s fourth largest city and then, you’re driving along a rural road with a little church beside real longhorn cattle grazing in a field.”

But residents of the district are hungry for improvements that will attract more grocery stores, restaurants, retail shops and sporting/entertainment facilities.

The district’s population of about 64,000 is mostly composed of hard-working families, nearly half of whom are fluent in Spanish and English. More than two-thirds own their homes, which have a median value of about $90,000. Residents depend heavily on automobiles for transportation, with 76 percent reporting that they drive or carpool to work.

A 2015 study by the Harris County Public Health Department found that its residents also want better food choices, as well as more places for their families to play, learn and grow up healthy.

The Town Center will have a significant positive economic and social affect on the entire East Aldine community, with a $13.6 million increase in property and sales tax revenues, according to the study. The boost would come partly from an increase in house values resulting from increased “walkability” near the Town Center.

The study noted that health benefits flow from the community services  of the BakerRipley center, the increased law enforcement presence at the 911 call center and through extra patrols funded by the District, and the access to affordable education and skills training at the Lone Star campus.