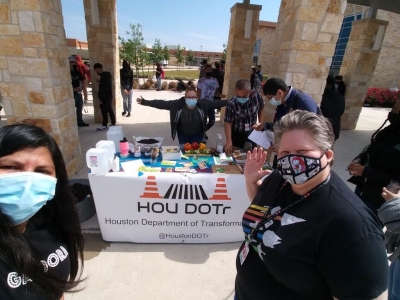 On Earth Day, students at Avalos P-tech High School happily spent the afternoon outdoors, planting the “seeds of transformation” for a possible community garden at the East Aldine area campus.

The gathering was a special event organized by a community organization called the Houston Department of Transformation, along with staff at P-tech, BakerRipley, the High Meadows Public Library, Precinct 2 Commissioner Adrian Garcia’s office and community volunteers.

The special “pop up event” was an effort to gather residents’ feedback about a community garden that would serve as a classroom, laboratory, art space and eventual business serving the East Aldine area.

East Aldine resident Shirley Ronquillo, a founding member of the Department of Transformation group, said the purpose of the event was the first step in engaging students about the idea of a garden at the campus. A second community-wide event will be held this summer.

A key part of the event was a survey of students about the future of the project. Principal Diana Isabel Gonzalez-Del Pilar, with help from office staff and biology teacher Rodelio Arvan, designed the survey.

“The whole idea was to engage the students in the idea of a community garden that could be an educational and community resource,” Ronquillo explained. 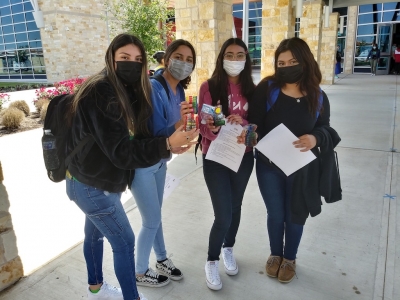 The Department of Transformation —it’s not an official part of its government — was founded nearly five years ago by a group of North Side residents who were concerned about traffic safety in their neighborhoods. As its name suggests, the group has evolved into a gentle force for change on issues ranging from simple seedlings to complex flood control.

The Department of Transformation is a product of the Avenue Community Development Corporation, which invited eight community leaders to attend a 2017 conference on urban planning in Los Angeles. The mission of the “department” is “to use civic engagement and tactical urbanism to create safe and beautiful communities.”

The phrase “tactical urbanism” is academic jargon for the group’s goal: getting communities engaged and involved in getting things done.

“That goal is to become a resource to the Houston area,” Ronquillo said. “We want to empower the community to take action through community service projects.”

Ronquillo, who grew up in the East Aldine area, initially joined the group to address public safety and crime issues on the North Side, where some of her family members reside. After Hurricane Harvey in 2017, Ronquillo became more involved in her East Aldine neighborhood, helping area residents learn about recovery resources.

She has mentored area youth in the creation of a book of poetry and the production of videos about their concerns about the problems faced by the area.

The long-term goal of a community garden for East Aldine would merge two characteristics of the area’s culture, Ronquillo said. Gardening has traditionally been a part of the Hispanic community, even if that just means a few pots of peppers on a balcony. And, East Aldine has long been dominated by an entrepreneurial spirit, with many home-based businesses. 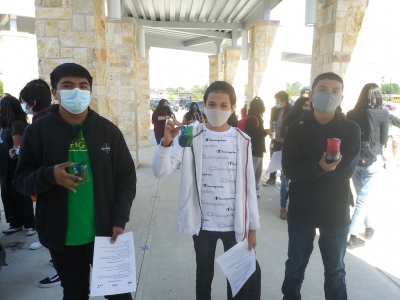 “The concept of a community garden doesn’t have to be just about planting seeds and gardening. It can be everything from creating an area where people have a space to go read and meditate, it can be about creating an art wall, it could be about photography to document the whole process,” Ronquillo said.

“The final goal could be for those who want to be entrepreneurs to be able to go and sell their products.”

Ronquillo said that it might take as long as three years to build and establish a community garden.

“But it was really exciting to see how excited the students were about this concept,” Ronquillo said. “That’s always our goal, to find out what the community really wants and needs.”

Recently, she coached several East Aldine area residents for their presentation to the State Senate’s Redistricting Committee about including funding for English-Spanish interpreters for its public hearings. The initial draft of the state budget, which was recently approved, included funding for the interpreters, Ronquillo said.

“So, it’s gratifying,” Ronquillo said. “Every day, we are changing lives.”