Skip to content
Home/Economic Development, My East Aldine/His coated flautas are a sensation in Aldine — and to 125,000 TikTok types

His coated flautas are a sensation in Aldine — and to 125,000 TikTok types 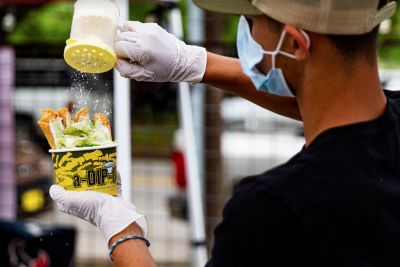 After a 21-year career in law enforcement for the Aldine School District and the Harris County Sheriff’s Office, Julio DeLeon has turned his super-secret spicy sauce into a booming family business and a second career as an online celebrity chef.

DeLeon, better known as “July the Lion” to his 126,000 followers on TikTok, is a familiar presence at pop-up markets in the Aldine area, where his chicken flautas are covered in a sauce so good that it is called “Adiptive.” Because, once you get started, you can’t stop at just one. You’re addicted.

The flautas are served in a cup, coated with the sauce and served with a generous amount of guacamole, Mexican cream and cojita cheese. DeLeon won’t tell all of the ingredients in Adiptive, but it is a special blend that includes jalapenos and cilantro.

The business is a family affair, with his wife Veronica and their three children pitching in at weekend pop-ups markets and other events to fry the flautas and fill the decorated cups. DeLeon admits that his wife “invented” the concept of the sauced chicken flautas in a cup, which he was reluctant to try.

“I was wrong. Very wrong. They are so delicious,” DeLeon said. 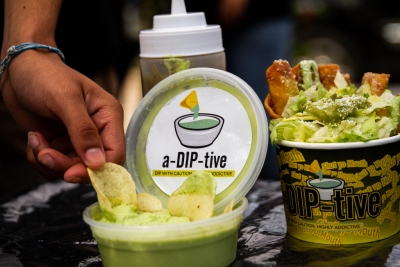 “I couldn’t do this by myself. It’s a real team effort. And they love going out to the markets, they really do like it. And my son is a super salesman,” DeLeon said.

The flautas are a popular treat at the pop-up venues, because “people are walking around and shopping and eating at the same time,” he said.

For now, DeLeon is happy to be going to some larger events, such as the Texas Holdem car and truck rally in Pasadena.

The TIkTok account allows DeLeon and Veronica to show off their favorite recipes for Mexican-style dishes, and a Texas favorite, barbecue brisket marinated in Coca Cola and slowly cooked for 12 hours. Their online cooking videos are presented in English and Spanish.

When she’s not showing off her cooking skills, Veronica is busy marketing her own cosmetics line, which she created in 2017. She features a variety of cosmetics, including a wide selection of the popular false eyelashes that range from “natural” to “lush.” Her cosmetics can be purchased online.

The family is so busy that DeLeon said he never just sits around watching television. “I really am just giving money away to DirectTV,” he said.