Skip to content
Home/Community, My East Aldine/A smoother East Aldine ride could be just around the corner

A smoother East Aldine ride could be just around the corner 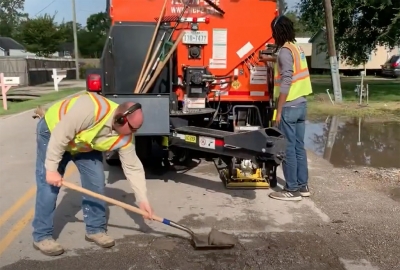 From the frigid February freeze to torrential July rainstorms, Houston’s 2021 weather has been “the perfect storm” for the proliferation of potholes that are a persistent and pricey problem for drivers and public officials.

Not only are potholes a threat to public safety, as drivers sometimes swerve to avoid danger, they are a costly and nearly constant condition on streets across the Houston region.

Pothole initiatives are nothing new for Houston’s municipal government. But they are rare in the non-city parts of the county’s four precincts.

“I have had a rim damaged by a pothole, and I don’t want that to happen to you,” Garcia said.

In a detailed video, Garcia stands in front of a new “pothole repair truck” designed to keep asphalt at precisely the correct temperature for pothole repairs.

The truck is emblazoned with the telephone number to report potholes in Precinct 2: 713-274-2222.

AAA reported in 2019 that American drivers spend about $3 billion every year to repair car damages caused by potholes. According to the American Society of Civil Engineers, poor road conditions cost the average American household about $3,300 annually in car repairs and other “hidden costs” such as lost time and increased fuel consumption due to traffic jams.

“One of the bigger issues we had was quality control. We want to be sure we create a quality repair that will last, so that we’re not right back out there in two weeks replacing material that has popped out,” he said. “We have improved our overall processes and standard operating procedures to make the streets safer for the public.” 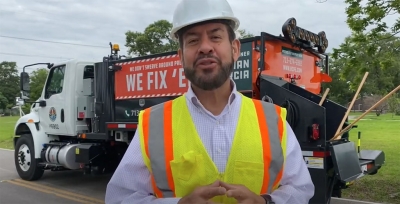 “I have a committed team, and they are out there doing a really good job,” he said. “We’re really knocking them out now. If a service comes in, we have it inspected by the end of the day. If it is determined to be a pothole repair, it will be repair tomorrow.”

Any “hole” in a road that is larger than three feet by three feet is deemed too large to be considered a pothole and is put on a different schedule for a road repair, Hernandez explained.

In addition to constant congested traffic, there’s the relative instability of Houston’s underlying clay soil, Hernandez explained. Add Houston’s temperature extremes and frequent rainfall, and you have “the perfect storm” for potholes to form, he added.

“When we get those weather extremes combined with rain, the water starts moving the asphalt in a direction it’s not made to go,” he explained. “When it starts moving, that starts a crack that causes a pothole to start forming.”

Garcia also cautions drivers about swerving to avoid potholes, which can lead to dangerous accidents.