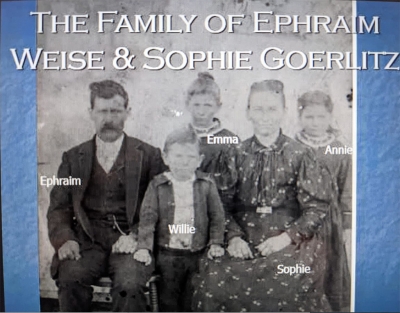 The identity of Alwiene S. “Sophie” Goerlitz Weise was never in doubt.

She was born in the Austin area, during the Civil War, on Dec. 23, 1863. Among her parents and siblings, she was the only American from first breath. The rest of the Goerlitz family had come from Germany.

She married freight hauler Ephraim Weise, had at least four children, died of pneumonia at age 41 and was buried near McDade, Texas, 134 miles west-northwest of Aldine.

But the shadowy fate of her narrow, marble gravestone — 2 feet, 9 inches high and engraved with German words — created a decades-long mystery.

The 101-pound stone was found more than 20 years ago on land in East Aldine, where seemingly no one knew who she had been —or how, or why, or when, the object bearing her name came to rest on the northeast edge of Houston.

Back at the Three Oaks Cemetery near McDade, which is marked by a Texas Historical Commission plaque, all that was visible on Sophie’s burial plot, at Row F of Lot F 2, was the base that had held the stone. It says “Weise.” Next to it was, and is, the gravestone identifying one of her daughters, who died at age 3 or 4.

The story goes that one day around 2001, an East Aldine man hefted Sophie’s stone into what was then the office of the Northeast News at Aldine Mail Route Road and U.S. 59/69. He said he had found the stone in the neighborhood — he may have said it had turned up on his property — and was hoping the newspaper could help find out where it belonged.

After the newspaper changed locations, the stone remained in place to be “inherited” by the staff of the East Aldine Management District, which took over the office space following its formation in 2001.

The tale of the well-traveled tombstone stayed hazy until a few weeks ago, as the District staff moved into the District’s new Town Center office building on Aldine Mail Route Road.

Hill was immediately fascinated, vowing to enlist internet-savvy friends in a quest to solve the riddle. They loaded the stone into her vehicle.

Since 2000 or so, the internet is a richer, deeper place for genealogical research. Fee-based web sites help customers build their family trees. Background information about people around the world proliferates on Facebook and other social media. Plus, more people are crafty about finding needles in the World Wide Web’s haystack.

Thanks to ancestry.com and dedication to the task, it took only five days for Hill and her friends to link the gravestone to its rightful place in McDade — and to find Ursula Richards, one of Sophie’s great great grandchildren.

“I got a Facebook message from someone (a friend of Sarah Hill) I didn’t know, but we have a mutual friend on Facebook,” recalled Richards, a seamstress/quilter/knitter (and more) in Kyle, south of Austin. “She said she had something for me that belonged to my family.”

Richards was skeptical at first.

But Richards quickly established trust with her new Facebook correspondent and the information being offered. Richards and relatives arranged a meeting with Hill and her inquisitive group at the McDade cemetery on June 18. 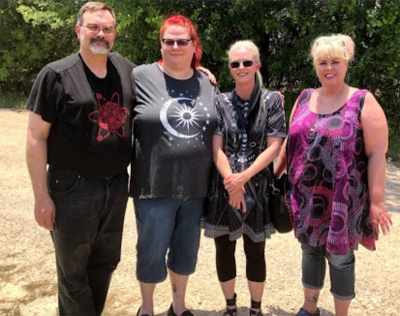 ‘’Ursula took the blanket off (the stone that Hill had driven westward) and said, ‘Oh my god,’ “ Hill recalled. “She was amazed and very grateful for all the work we did.”

The group moved the stone to Richards’ vehicle.

Richards said that almost before she got the words out of her mouth, the group from Houston accepted her invitation to her family’s annual reunion at a hotel in Kerrville on July 24. Seventy-four family members attended, too.

Just before dinner was served, Richards sprang the supreme surprise to the group, many of whom are elderly. She showed a PowerPoint presentation about family history and the return of the gravestone.

The unwrapped stone was placed on a table, where grinning and relieved family members gathered around for photos.

“Everybody was kind of overwhelmed,” she said.

A sight-impaired relative of Richards walked up to the stone and felt its engraved letters.

Richards plans to select a gravestone expert, funded by the reunion group, to prepare the stone for restoration to its rightful place this year. 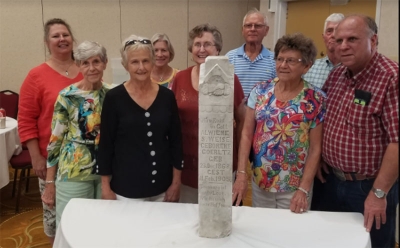 At the top of the gravestone is the engraved image of clasped hands. Historians say the image started being used in Europe in the1800s to represent a farewell to earthly life and a welcome into heaven.

A piece is missing from the upper right corner of the stone. The truth about how the stone ended up in East Aldine is missing, too.

Richards and Hill have talked about this. They favor the theory that a group of unknown young men got drunk and, for lack of something better to do, made off with the marker as some ridiculous practical joke. And then, ending up in the Houston area, heaped insult on top of injury by dumping it in East Aldine.

Hill surmises that one way or another, the gravestone was stolen — and driven for at least two hours to the Houston area, in the kind of freight hauling Sophie’s husband, Ephraim, never did.

“It didn’t float there in a flood and it sure didn’t fly there,” said Hill.

Said Richards, “Everybody I have told at work is baffled. I said, ‘Really, you can see how somebody bored out in the country, drinking, doesn’t have any common sense and would do something stupid’ (like that). I can totally see that.”

Somewhere in East Aldine, someone may know the rest of the story.