From her third-floor workspace in the East Aldine Management District’s new Town Center office building, Harris County Sheriff’s Office Sgt. Terry Garza has a spectacular view of the community she has loved since she was a young patrol deputy. 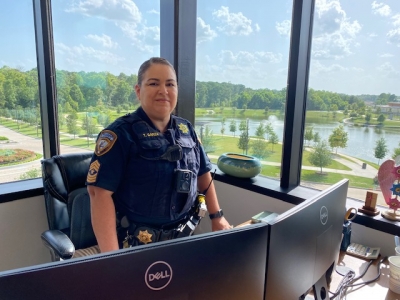 Garza, who oversees the evening shift patrol of officers assigned to the district, is a popular figure in the area, where she led an outpost of the youth Explorers Program of the Sheriff’s Office.

Working with community groups, she has also delivered food, school supplies, winter coats and prom dresses to the needy as a volunteer.

A native of Albuquerque, N.M., Garza spent part of her youth in foster care in Harris County. By the time she was reunited with her mother, she had learned first-hand about children in need.

“I was that little kid who needed school supplies and a coat for the winter,” Garza said. “Because this is the first place I actually patrolled as an officer, East Aldine has my heart. I just fell in love with the people out here, because everyone is so appreciative.

“Even people who need help are willing to share with others,” Garza said.

The office, staffed mainly by Dep. Rebecca Limon, will serve as a “mini-police station” where residents can report non-emergency crimes such as identity theft or credit card abuse.

The unit also will investigate “non-emergency” property crimes, such as home and vehicle burglaries. In those cases, deputies will go to the scene to collect evidence such as fingerprints or DNA, when possible.

There will be a total of 15 officers assigned to the East Aldine District Patrol on different shifts, all funded by the District through a contract with the Sheriff’s Office, Garza said.

“The patrol is in addition to the Harris County Sheriff’s Department’s regular service,” Garza explained.

She will oversee the five evening shift deputies assigned to the district patrol. Those officers’ duties will be “pro-active” assignments, such as searching for people with pending arrest warrants or investigating possible narcotics possession during traffic stops. One recent afternoon, a couple of her deputies assisted in a prostitution sting operation that netted several arrests near East Aldine.

Part of the unit also will be assigned to handle nuisance abatement, which will include public health issues such as abandoned buildings, dumped trash and junked vehicles.

After graduating from Stephen F. Austin High School, Garza went to work for the Houston Police Department as a secretary. One of her duties – which she really loved – was acting in Crime Stoppers’ crime re-enactments that were broadcast weekly on KTRK-TV Channel 13.

“I was always a crime victim, never the criminal,” Garza said. “That was really fun. I loved it.”

Garza served almost four years as an investigator of child deaths for the Texas Department of Protective Services. Because that job “really took a toll,” Garza shifted to the Sheriff’s Office.

Her “most rewarding” job in law enforcement, Garza said, was working as a teacher and trainer for the Explorers Program, which lets young people considering a career in law enforcement to learn from deputies. Garza has maintained contact with many of the Explorers graduates, including a young man who was recently sworn in as a Department of Public Safety trooper.

“I enjoyed teaching young people how to do my job and teaching them different life skills and giving them advice. I loved it, because I was always so proud of them,” Garza said.

Because of working with East Aldine youth in that program, Garza closely followed the work of East Aldine Management District. That led to her connections with other community leaders and volunteers.

“It’s been great seeing how much improvement there has been in this community,” Garza said. “I’ve seen so many good things happen here and so many community leaders that want to do a lot for the residents.”

Garza, who recently celebrated her 51st birthday, is married to a retired Harris County deputy. The couple has four grown daughters.

For relaxation, she said that she and her husband Craig love to fish near Sabine Pass. She is “an excellent cook” of fresh fish.