Skip to content
Home/Community, My East Aldine/Westfield FD more ready than ever to battle flames and floods

Westfield FD more ready than ever to battle flames and floods 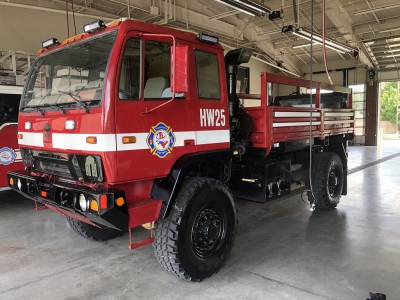 Through funding from Harris County Emergency Services District (ESD) 25, the department recently obtained a $79,325 command vehicle, which will haul a $26,964 swift water rescue boat purchased last year. A new, protective tarp was recently added to the high-water rescue truck, which was acquired as government surplus for about $3,000. Subsequent repairs have cost about $20,000.

“They’re now fully prepared to do all kinds of rescues, if needed,” said Royce Sunday, president of the five-member ESD 25 board that oversees funding for the Westfield Fire Department. Most of the equipment is housed at the department’s $3.6 million station at 4105 Lauder Rd. There is a second, smaller station at 11251 Bentley.

Through a 10-cent tax on every $100 worth of property in the ESD, the department provides emergency medical assistance and fire suppression services to about 45,000 residents in northeast Harris County, primarily in the area served by the East Aldine Management District.

He proudly oversees a crew that he compares to “the best” firefighters in the county.

“I’m probably a little biased, but what we have here and what we work with, this community is literally receiving the best fire protection in the county,” Goodroe said. “The guys we have here are some of the hardest-working, knowledgeable firefighters you could possibly have.”

“What we do here is actually pretty incredible,” Goodroe said.

The Fire Department was founded in 1942 by an all-volunteer force of men who built the first fire station, assembled a fire truck, paid for gasoline and held barbecue fundraisers to finance their work.

The board oversees purchases for the department and provides an annual operating budget of more than $1 million.

Goodroe, who has worked for the Westfield Department since 2007, explained the workings of the department.

Because the Houston Fire Department gives firefighters 24-hour days of duty and several days off, Westfield is able to hire part-time, paid firefighters and paramedics to work on their days off from the city jobs.  About 95 percent of the Westfield force is from the Houston department.  But there’s even a firefighter who flies in from Oklahoma to work in the force. 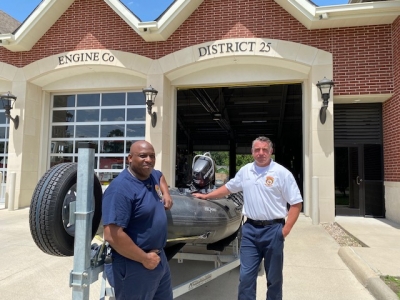 Westfield is always looking for more volunteers, as well as professional firefighters who want to work part-time, Goodroe said.

The opportunity for on-the-job training for ambitious firefighters is a good reason to join, Goodroe said.

“This is such a dynamic environment in how we have to run, those young firefighters are given opportunities to work in other areas, such as district chief or captain. It gives them the opportunity to work in leadership roles,” Goodroe said.

Because of the area’s propensity for flooding during heavy rainfall events, the department definitely needs the new water rescue equipment.

Also, there are several fires in the area.

“Some of that is arson, some of that is accidental fires such as grease in the kitchen or vehicles too close to the house. But we really need better fire education” to prevent fires, Goodroe said.

Far too many East Aldine area residents do not have reliable smoke alarms or carbon monoxide detectors in their homes, he explained.

Another factor that results in frequent house fires is the average age of houses in the area. Many homes constructed in the 1960s and 1970s were built with aluminum wiring, Goodroe said.

“A lot of the fire, attic fires in particular, are due to that,” Goodroe said. “And home renovations as well. When you have aluminum, you can’t do renovations with copper wiring. The two metals don’t match.”

During the February freeze that caused power outages and deaths statewide, Goodroe said, people in the Aldine area used dangerous ways to heat their homes, often with tragic consequences.

“We made several runs where whole families had to go to the emergency room, because they were using their barbecue pits inside with whatever would burn,” Goodroe said. “It was very depressing, and in a lot of ways, heartbreaking, watching people struggling to heat their homes.”

Goodroe is extremely proud of the firefighters who work for the department.

“How we operate is not conventional. We’ve got five individuals a day here. And, at our other station, we have two people,” Goodroe said. “A lot of our guys are like John Wayne. They make it work, and they work very hard to make it work.”

Next, Sunday hopes to get an emergency, flashing light installed in front of the fire station on Lauder Road.

“We really need to get one installed. The traffic out there is really bad,” Sunday said.