A dogged young detective gets an A from Aldine ISD 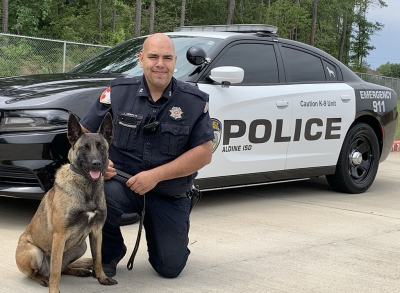 A furry, four-legged worker at the Aldine Independent School District was recently recognized as an “Employee of the Month” by the district’s board of trustees.

Delta, a 2 ½-year-old Belgian Malinois, was cited for her work performance and community service in the Aldine community. The “canine cop” –- and her handler, Officer Jonathan Arnold —were among a group of district employees honored by the board.

As Arnold’s girlfriend and her two daughters joined them for a photograph, Delta dropped her “tough cop” routine and reverted to her role as family friend. Tail wagging, Delta practically smiled for the cameras. The Belgian shepherd breed, slightly smaller than a German shepherd, is often used by police agencies because of their keen sense of smell.

It was a sweet moment at a school board meeting, a rarity in these days of partisan rancor and confrontations in such public settings.

For Arnold, it was just another time that Delta was “the star” in their partnership, the “dream job” he has wanted since he was a boy.

“I always wanted to be a police canine handler,” he said. “When I was a kid, I would watch police shows with people like Chuck Norris and I wanted a police dog.”

“I just love dogs,” Arnold said. “Dogs are the purest of the pure. They’re the only living creatures on earth who would get between you and a bear, just to protect you.”

Delta lives with Arnold, who also has four French bulldogs at home. The canine officer has to follow some strict rules, and she isn’t really allowed to “play” with the other dogs, he said.

Arnold and Delta have been though extensive training since he was named a canine handler in April 2021. Arnold and Delta then spent two weeks at Pacesetter K9 training academy near Austin.  They are required to maintain a strict training regimen each week. 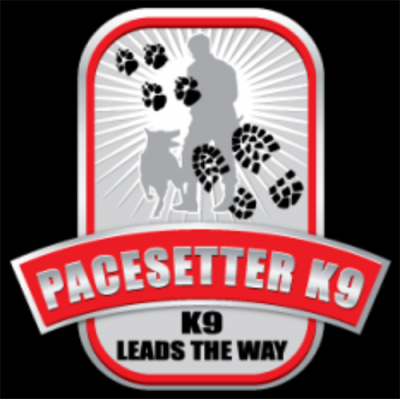 Delta is certified by the National Narcotics Detection Dog Association.

“I love doing what I do,” Arnold said. “Of all the jobs in law enforcement, this has been my very favorite. It’s a wonderful opportunity. I never feel like this is work.”

In a presentation to the school board, Cordova cited the canine partnership for their hard work and community service.

Since April, they have participated in 130 “deployments,: Cordova said. Their work has included 953 locker searches, 468 classroom searches, checks of 202 vehicles. As a result, they duo has made 5 drug seizures, Cordova sad.

In addition to removing illegal drugs from the schools, Arnold and Delta have participated in many East Aldine community events, including school safety talks and Operation Blue Santa, which provided toys for needy children.

Arnold said Delta was recently feature in a segment on local TV news about a student in an Aldine elementary school who has cancer and has dreamed of becoming a police officer. The boy has been “certified” by 35 area law enforcement agencies.

Arnold allowed the youth to learn how to walk Delta, who is very strong. “She did sense that she needed to be very gentle,” he said.

“She’s the star, I’m just the chauffeur,” Arnold joked. “And I just want to give kudos to the chief, who has given me this opportunity. I do think it has made a difference in this community.”

Arnold said he is quite aware that some people are afraid of dogs, so he does everything he can to put them at ease around his partner.

“I recently did a classroom search, and I could tell the teacher was a little nervous. So I just kept Delta very close,” Arnold said.

When he conducts safety classes with Delta, Arnold said he does allow students to pet her.

“She has been trained not to be aggressive in those settings. As for me, I want students to know there’s a lot of good police officers in this world. I’m glad to have the opportunity to bring the community together with the police.”