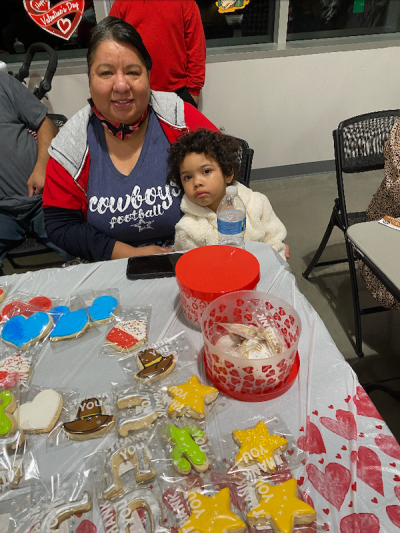 In East Aldine, celebrations and other gatherings usually present the opportunity for selling home-made crafts, food and other goods.

So it was as dozens of East Aldine area residents literally kicked off their 2022 Valentine’s Day celebration at a country western, rodeo-themed party sponsored by the non-profit BakerRipley, which has a public service location at the East Aldine Town Center.

As any self-respecting Texan knows, there’s never any need for an excuse to wear red cowboy boots with rhinestones and pearls, but a Valentine’s weekend dance in East Aldine will do.

There was plenty of boot-scooting going on, as disc jockey Jose Rivera chose upbeat tunes to get the crowd line-dancing in the middle of an arena lined with vendors offering giveaways and goodies for sale. Red heart-shaped balloons surrounded benches lined with cow-print pillows, a great spot for family photos and crowd-watching.

There was even a mechanical bull for novice riders and a barbecue-themed food truck on the patio just outside the dance hall.

Kathy Schumacher, 73, was doing “pretty good” at her sales table filled with crocheted Valentine’s Day afghans and boxes of chocolate, two cozy comforts for any sweetheart.

“I made each one myself,” Schumacher said. 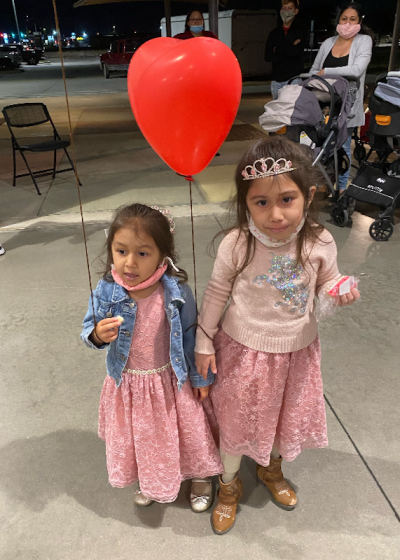 Maria Sandoz’ table of dried flower arrangements provided splashes of vibrant color that will last long after the Super Bowl and Valentine’s Day weekend are over.

Vendors also included community organizations or service vendors, including student workers from Lone Star College’s East campus, who gave out campus swag from pens to drinking cups. Dean Louis Lucio was on hand to “supervise” and enjoy the music.

Food and drinks for the party were provided by the CoffeeQ food truck, which offered beverages, sandwiches and treats.

As the party wound down, other East Aldine residents were preparing, and hoping, for a prosperous weekend. Street vendors were already picking prime spots along major streets, with pop-up tents, guarded by vans, filled with roses, flowers and gift baskets.

Studio 59, the popular pop-up market, dance studio and event space, planned a three-day weekend for vendors to celebrate the holiday of love. Or, at the very least, the hope of love. 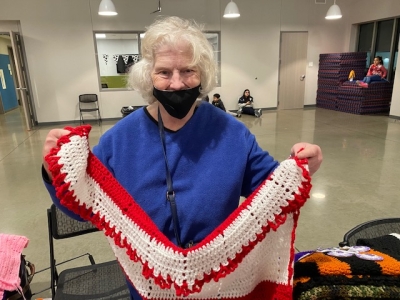 DJ Jose Rivera, 42, said the only problem with the country-western theme was the melancholy mood of so many well-known hits in the country genre.

“Yeah, I was getting a little sad listening to so many of the songs. I found that interesting. So, I switched to some more upbeat tunes,” Rivera said. “I think that anytime you open yourself up, you also are opening yourself to the possibility of heartache.”

“It always tells a story. So, anybody can relate to it – whether it’s about a broken heart or a truck crash, it’s really all about life,” Bob said. “But life isn’t always about heartbreak.”

Rivera chose the best country western song of all time to close down the festivities.

Written by none other than Willie Nelson, the late great Patsy Cline belted out “Crazy.”

And I’m crazy for loving you.”