Thanks to local professionals in a Leadership North Houston class, a safe-family park soon will re-open behind the Buckner Family Hope Center in the heart of the East Aldine Management District.

The park, at 4700 Aldine Mail Route Rd., sustained heavy damage from vandalism and from the huge ice storm that paralyzed the Houston area in February 2021. Several large trees died and intruders cut down others for use as firewood.

The sub-freezing temperatures caused some long-forgotten underground pipes to burst. A section of the 6-acre park land became an unattractive, slushy “ice rink” due to 22,000 gallons of water that spewed unchecked for days.

Now a class of leadership trainees has carried out a clean-up mission that allows the Buckner Family Hope Center charity to schedule a Spring Break Wilderness Survival Camp for Aldine-area youths at the revived park.

Buckner teen program coordinator Jade Paredez, a Leadership North Houston member, proposed the park cleanup to her class last summer. In late January, the class members were joined by Logcutters, Inc. of North Houston to clear the space. The class also is raising funds for a gravel pathway that will wind through the first phase of the redeveloped park.

“The goal for Leadership North Houston was just to get this park back into a usable, safe space,” Paredez said. “They helped us get the Logcutter company to remove three downed trees, and they cut down another tree that was already dead. They came out and helped their community.”

Paredez has recruited local Eagle Scouts and firefighters to help lead the Wilderness Survival Camp, scheduled March 14-17, during the Aldine Independent School District’s spring break. The camp will teach tech-savvy kids how to get by without Google Maps. Classes will include how to use a compass and a map, tie knots, build a shelter, safely start a campfire, and learn about wildlife.

Although those skills might not seem vital to urban-oriented youth of East Aldine, the program is aimed at triggering “those light bulb moments” that can fire imagination or introduce new ways of thinking, said Shonice Reed, Buckner’s Aldine executive director.

“One of our goals is to make youths aware that there is opportunity in learning. We provide opportunities that you may not normally get. Those skills, you may not need them right now, but you never know that’s going to happen,” Reed said.

“We want to draw some people in, now that the park is cleaned up,” Paredez said.

As part of her participation in Leadership North Houston, which is sponsored by Lone Star College, Paredez has developed a four-phase park redevelopment plan.

It includes a recent grant application to restore electricity to the tract, a key component for ensuring safety. 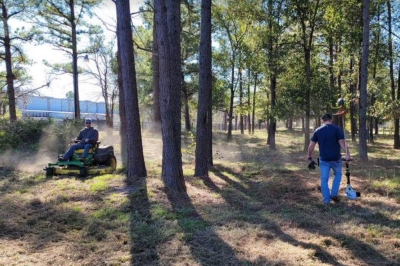 Her ambitious plan includes rebuilding a theater-style seating area for outdoor education, as well as family seating areas that won’t be susceptible to fires in ice storms. The goals include a xeriscape — a cactus-filled and “stone-stacking” garden. Outdoor games like huge dice and corn-hole planks would round out family-oriented activities.

Buckner Family Hope Center has a long history in the East Aldine community. It was founded about 30 years ago as the Aldine Youth Center by community leader Sylvia Bolling.

In 2012, the Dallas-based Buckner Foundation “came and knocked on the door,” Reed said. “And Sylvia realized it was a way to carry out her work in an even greater capacity.”

“East Aldine is a family-oriented community,” Reed said, explaining the non-profit’s role. “But these are families that are struggling to get by sometimes. And the pandemic worsened that.”

Being close to the BakerRipley social service center campus in the East Aldine Town Center “is wonderful,” Reed said: “If there is something we can’t do, we may be able to refer some of our clients over there. We are always working together.”