Less than a year after opening, the 179 students who attend the public Young Women’s Leadership Academy already lead the other Aldine Independent School District schools in math and reading test scores. 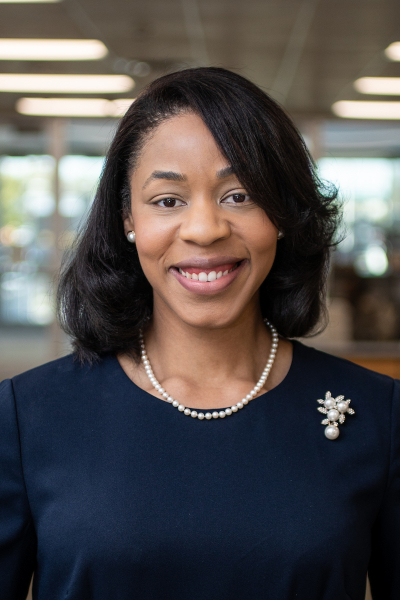 The testing achievement is due partly to the dynamic leadership of the new school for 6th and 7th grade girls where Principal Jericah Jackson and her dedicated staff are committed to the “sisterhood” they provide to the students.

The determined young ladies who attend the academy will stay for their next grade in the fall as the school adds grade levels, eventually serving students in the 6th through 12th  grades.

Jackson, a 1997 graduate of Aldine ISD’s MacArthur High School, is a former pre-med major who “fell into” education by way of a substitute teaching job she took between graduate-level course work.

She recalls wearing a pastel pink pantsuit to her first day as a substitute — at a middle school. She was immediately met with fashion comments from the students: “Look at the Mary Kay lady, come to sell us make-up!”

Tall, attractive and professionally dressed, Jackson admitted: “I still get fashion advice from my students.”  Which comes with the territory of being around middle-school-aged girls, as many teachers will attest.

Jackson said she made the decision later to use her background in pre-med to begin forming “science teams” so she could take her students on field trips to meet professionals in STEM fields (science, technology, engineering, mathematics).

Then she decided to “make a broader impact.”

“That’s when I decided to become an administrator and bring about change through teachers, rather than students,” Jackson said.

While she is proud that the students are leading the district in test scores, Jackson said test scores aren’t always an accurate measure of students’ intelligence.

“So, in addition to seeing their performance in their classes, I want to see what kind of projects they are performing,” Jackson said. 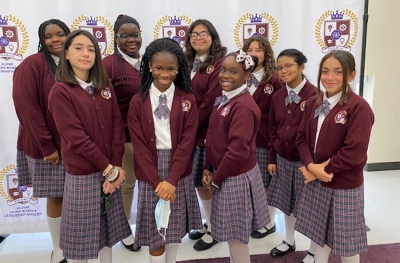 “Once our girls are confident and feel that they can lead, and I believe they are trusting in their teachers. I have a good feeling about our trajectory,” she added.

“It’s a great environment to be in,” Garcia Powell said. I honestly think my expectations for girls are a little higher, because I’m female. “

The 6th graders are reading their seventh book this year, “Voyage to the Bottom of the Earth,” which will be followed by “I am Malala,” Garcia Power said.

“We’re working on a unit about courage in crisis,” she explained.

Because they’re in a single-gender class, Garcia Powell said, “I think that helps them take more risks in their writing. It’s also helping them to read a little bit deeper. They’re asking, ‘why do I believe this,’ and then trying to find answers in literature.”

Students expressed their happiness at the all-girls’ aspect of education, although a handful did say they would like to spend more time with boys.

“I like going to an all-girls school because it helps me get a better education, and I can build a sisterhood bond with my peers,” said Katelyn Herrera.

Joelena Danful said she feels “less pressure” at the academy.

“If I go to a co-ed school, I feel pressured to always be the best,” Danful said. “But when I am around other girls, I feel like we are all working hard for the same goal. I don’t feel pressured to be number one.”

One student expressed concern that she feels “awkward” being around boys because they aren’t at her school.

But another young lady was adamant that the students are better off without the male gender on campus.

“When boys are there, they make fun of other people, they like to group up,” said Emmeise Lima.

Physical Education teacher Elizabeth Flores has witnessed a different kind of growth in her P.E. classes. The girls at the Academy have become much more outgoing, and willing to try different sports, the 17-year veteran educator said.

“The growth in the confidence of these young ladies is, by far, greater than what I have seen anywhere else,” Flores said. “In PE classes, I always had all girls, but this has been so different.”

“I used to have to say ‘speak up,’ but not anymore,” Flores said. “Not only are they building confidence in gym, but in the classroom.

“I’ve seen the same jump in girls from sixth to eighth grade, but never this much growth in one year. I’ve seen them change socially, athletically – just coming out of their comfort zone.”

Because of the academy’s size, girls who want to participate in University Interscholastic League team sports must try out for teams at other Aldine campuses. One of the academy students leads the 7th grade track team in her events, Flores said.

“But it’s not just that. Because we don’t have the traditional team sports, I’ve started a Recreation Club. And I’ve seen these young ladies come to understand that to succeed in college, and life, they need to be mentally and physically fit,” Flores said.

As a result, the students have expressed interest in “non-traditional” sports that aren’t usually played at school, like badminton, pickleball, golf and archery.

“I’ve also noticed tremendous growth in the social aspect of sports, like being a leader,” Flores said. “We help each other out. We talk about sisterhood a lot. Encouraging others is a way of empowering them.”

About public schools for Texas girls

The Aldine academy is just one of 10 “all girls” public schools in the state of Texas, a result of landmark federal legislation sponsored by the unlikely duo of former Sens. Kay Bailey Hutchison (Republican) of Texas and Hillary Rodham Clinton, of New York (Democrat).

Women lawmakers recognized the need to allow public schools to offer single-gender schools, specifically aimed at encouraging girls to pursue rigorous education in STEM as well as leadership skills to ensure success in their careers.

Aldine’s Young Women’s Leadership Academy is part of a network of similar schools nationwide, which includes schools in the Austin, Dallas, Fort Worth, Grand Prairie, Houston, Lubbock, Midland, San Antonio and Ysleta independent school districts. The acclaimed Ann Richards School in Austin may be the best-known and recently opened a new building that includes a massive slide inside its library.

Announcing the Aldine school in 2021, Superintendent Dr. LaTonya said: “Launching the YWLA directly connects to our goal of expanding operations for college and career access, along with that of implementing rigorous curriculum and instruction. It is our collective aim to ensure that every child performs at the highest level possible. A leadership academy focused on building critical skills among our female students is one path to achieving this vision.”