Concerts return to Town Center with zest and bright future

Live music has returned to the East Aldine Town Center amphitheater for the second year in a row, drawing the attendance of jazz and Latin music fans as well as relatives and friends of student performers allied with the Diaz Music Institute.

But behind the rhythms and showmanship are qualities that many leaders expect will contribute to the long-term future of the community, its residents and the East Aldine Management District, which built the Town Center.

Music education is key in developing “critical thinking skills” in students, he said.

“We teach so much more than music. Being in any performing art just transcends everything else they do in life, big-time,” Adamson said. “They’re the ones doing the creating, taking the responsibility, taking ownership (of the music) and that just helps build a better community.” 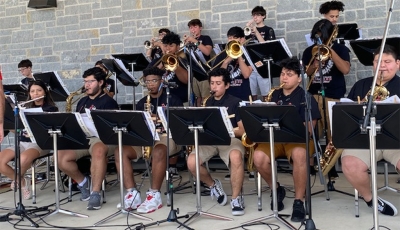 “These kids make it so easy to get up in the morning, and they make it hard to leave at night,” he said.

Events like these also continue to contribute to a new, dynamic image of the East Aldine area.

“Programs like this are exciting. They give other people a chance to come enjoy what we have to offer in East Aldine,” said Selina Valdez, performing arts chair of the East Aldine Arts Council, a committee of the management district. “It’s just great to have so many other communities come out here to perform.”

The festival drew musical talent from several area school districts and a crowd of about 300 audience members, who gathered in lawn chairs and beach blankets on the grassy hillside as a spring breeze brought some cool relief from the sunny skies and hot sounds emanating from the stage.

Appreciative applause interrupted the musical stylings offered by students from the Diaz Music Institute, which includes students from East Aldine’s MacArthur High School. Their acclaimed and talented director Jose Antonio Diaz organized the festival, which included a handful of art vendors, a petting zoo and a couple of food trucks. 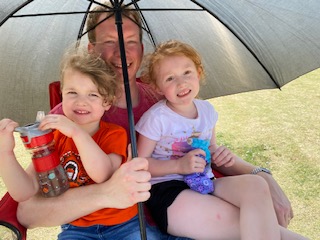 “I love the atmosphere, I love the activities out here, and I think the kids are having a great time out here today,” Adamson said.

Diaz founded the private Music Institute in 2002 and served for 35 years as director of music at MacArthur. A Grammy-nominated educator and LULAC Teacher of the Year, Diaz continues to oversee the institute’s famed band, Caliente.

The Institute is internationally recognized as a leading organization for teaching and developing Latin and jazz. It is also recognized for shaping Hispanic musicians into successful careers: 100 percent of participants in the Institute are high school graduates. Since the Institute was created, its students have earned more than $2 million in college scholarships.

During the festival, Diaz was busy introducing the other bands while keeping a watchful eye and ear on his students. At one point, he sent a group of institute students to work in a booth handing out free books to younger kids in the crowd.

Before the music festival, talented artists from Aldine’s Rose M. Avalos P-Tech High School were honored with a display of their art work at the BakerRipley Center in East Aldine.