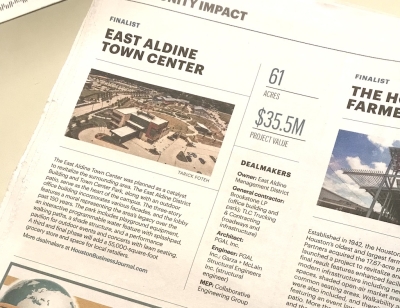 On behalf of the people it serves, the East Aldine Management District is proud and humbled at the same time now that the Town Center’s new, multi-use office building was named among the Houston area’s three top commercial real estate structures in two categories in the Houston Business Journal’s annual Landmark Awards.

The office building, which anchors the dynamic Town Center campus that was built by the District, was named a finalist in the Special Project and Community Impact categories. The campus also includes BakerRipley and Hope Clinic social service locations, a Lone Star College branch, an amphitheater and audience lawn, playground equipment, the Harris County Sheriff’s Office emergency call center and water features such as a pond and fountains. The next phase of the development is for retail stores and other forms of commercial activity on now-vacant land.

But commercial development across the street and eastward on Aldine Mail Route has already begun in apparent anticipation of increased consumer traffic in and out of the Town Center. 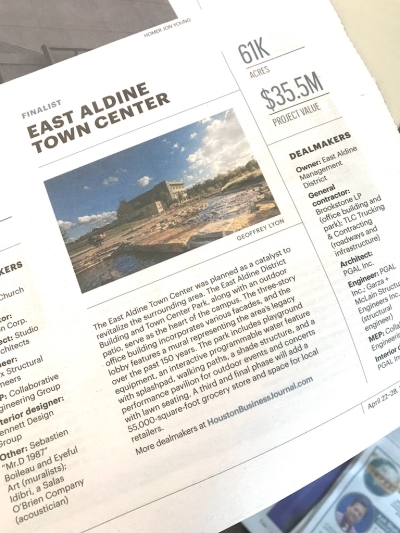 With an event and banquet space on the first floor along with a mural tracing the history of East Aldine and a Sheriff’s Office storefront, a sleek patio on the second floor and staff offices throughout the building, the central structure has already hosted community meetings and celebrations, District board meetings, and a business networking luncheon. Just outside the building, free, live concerts have started taking place at the amphitheater for the second year in a row.

“The Town Center is already having a ‘community impact’ and is certainly a ‘special project’ as East Aldine continues to grow and mature, thanks largely to the family oriented, hard-working nature of its residents and businesses,” District Executive Director Richard Cantú said. “So we are especially grateful to receive honors in those categories.”