Few public school teachers are celebrated under the bright lights of Broadway for their efforts to direct, train and inspire a new generation of talent. But Aldine ISD teacher Roshunda Jones-Koumba recently received a teaching excellence award during the national television broadcast of the Tony Awards from New York City.

Jones-Koumba is the drama teacher at G.W. Carver Magnet High School. She has taught in Aldine for 19 years.

She is also a graduate of Prairie View A&M University, where she was the keynote speaker at the university’s 111th Summer Commencement ceremony.

In accepting the Excellence in Theater Education award presented jointly by Carnegie Mellon University, the American Theater Wing and the Broadway League, Jones-Koumba said: “I want the best for every student who walks through my door. I want them to know the sky is the limit, and they can be anything they want to be.”

She also quoted poet Maya Angelou: “My mission in life is not merely to survive but to thrive.”

She thanked school district officials, Houston Mayor Sylvester Turner, the Acres Homes community and her students: “You are my inspiration and my reason why. The arts, especially in black and brown communities, provide the fertile soil in which our students flourish. We must continue to enrich them with our love and a passion for the arts which shows them even the unattainable is possible.” 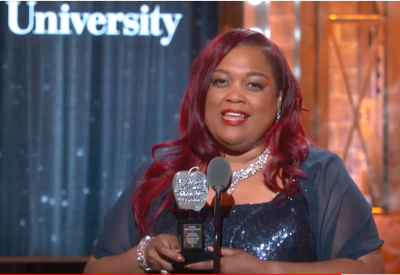 Her nomination, and the award, were a total surprise. She was nominated by Carver technical director Jabari Collins, who recruited her students to help make a video nominating their teacher for the award.

More than 5,000 teachers across the country were nominated for the award, which recognizes a K-12 theatre educator who has demonstrated monumental impact on their students and embodies the profession’s highest standards, according to Aldine ISD.

A native of Wharton, Texas, Jones-Koumba got interested in theater during her middle school years. Although she started out as an education major at Prairie View, she quickly decided to follow her passion and switched to theater. She holds a bachelor’s degree in theater and a masters’ degree in administration.

For Jones-Koumba, arts education is key to keeping many students from economically underprivileged backgrounds in school. Involvement in theater and music programs raises their tests scores, and allows them to go further in their education, she said.

“For students who aren’t involved in athletics, arts programs are an incentive to be involved in their school community. Also, students who have been exposed to arts education have test scores that are measurably better.”

“They also develop critical skills that are so important in their future lives,” she said. Theater students “rarely” get stage fright during job interviews, for example.

“But they also learn critical thinking an other people skills that go a long way to serve them throughout their live,” she said.

In addition to her duties at Carver, Jones-Koumba is involved with other local theater companies, including Theater Under the Stars.

Now preparing for her 20th year in Aldine ISD, Jones-Koumba has not yet decided which theatrical performances she will choose this year for her students.

“I’m still working on that,” she said.