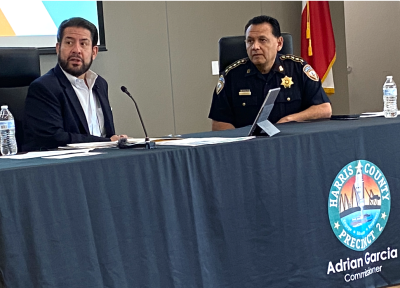 “I am afraid to go out of my house at night” because of gunfire in her neighborhood, she told the lawmen.

Gonzalez and Garcia, a former sheriff, had convened the meeting with area residents to explain how more than $2 billion in recent crime-fighting resources and manpower are bringing more safety to the East Aldine District in northeast Harris County.

*More than $780,000 for the high-tech “ShotSpotter” system that allows police to track the exact locations of gunfire.

*More than $200,000 invested by Garcia for a workforce development program for homeless residents of Precinct 2.

*An additional $110,000 from the District for adding streetlights in residential neighborhoods and about $150,00 for electricity to power those lights.

*The higher visibility of law enforcement officers due to the location of the Harris County Sheriff’s Department’s new, state-of-art 911 Call Center at the Town Center. The center is located on land donated by the East Aldine Management District.

But, as Gonzalez acknowledged, the push against lawlessness in the area doesn’t end.

Apparently, the woman who complained about gunfire lives just outside the boundaries of new ShotSpotter system, which has aided police efforts to apprehend criminals who are involved in shootings or to track the weapons used in crimes.

Also, the ShotSpotter system is in a three-year trial period.

Regardless, the sheriff expressed regret that the woman was hearing gunfire, and he encouraged her to report it by calling 911.

“It’s unacceptable,” Gonzalez said. “We know somebody firing a weapon is serious. It’s not a toy, someone could get hurt or killed. So, if you hear it, call 911.” 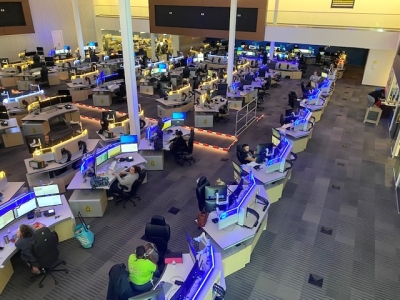 The officers are making a dent in northeast Harris County’s criminal activities, Santos said: “Residents are telling us that we are making a difference. I think, personally, the community is happier. People can now call us directly.”

Another woman posed a question to the sheriff: What can the county do to stop speeding drivers in her neighborhood?

Statistics, meanwhile, show the deputies have made arrests, seized illegal drugs and guns and run dangerous trespassers near residential neighborhoods.

The District’s deputies even put a stop to grave-robbing vagrants who were stealing copper urns from a local cemetery at night.

Cemetery owners had called to complain that the urns, used to hold floral displays on graves, had been rapidly disappearing at night, when the cemetery is closed. But thieves were sneaking in with the intent to later sell the urns to metal recyclers.

The deputies also participated with the Aldine Independent School District in an “active shooter” drill at an area elementary school. Deputies were not aware that it was a drill until their training was completed, Santos said.

“We are spending more than $2 billion on public safety, the community and the courts to make sure we are doing as much as we can, to make sure you are as safe as possible,” Garcia said. “There is promise that our efforts are working.”