This is Part 2 of a 3 part series covering the History of East Aldine. Read part one “Early Days, and How Did Aldine Come to Get Its Name?” here.

Jayhawks’ Roost and The Great Storm 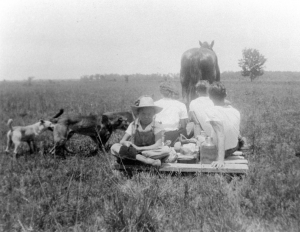 We mentioned Kansans and newspaper databases. In late 1899, many of the former began to appear in entries in the latter. Small-town personal notices like these abound:

“Miss Cora Young arrived in Paola from St. Louis last week and will remain here a brief time, from where she will go to Aldine, Texas.” — Miami Republican, February 16, 1900

“F.W. Colby returned Thursday from Aldine, Texas. He says the Paola people are all contented and happy there.” — Miami Republican, March 23, 1900

“Attorney John C. Carpenter, with his family, will soon move to Aldine, Texas, where he proposes to engage in the fruit business.” — Olathe Tribune, Olathe, Kansas, August 10, 1900.

Colby would say the Paola people were all happy whether they were or not — he was the developer who talked them into moving there. Perhaps unfairly, he was branded a wolf in sheep’s clothing by an Irish-born, Kansas-bred reporter.

Sheridan suspected Colby of concealing his capitalistic motives beneath a thick veneer of Christian moralizing. The Irishman thought it especially rich that Colby portrayed Paola, Kansas as a Sodom-on-the-Plains, when every right-thinking Kansan simply knew that Texas was a backward doomscape of gun-toting hotheads, fallen women, drunken judges, and failing, if even existing schools. (Kansas papers zealously reported every Texas murder, riot, and bar-room brawl as if they were personal attacks on every Jayhawk from Kansas City to Colorado.)

With more than a wee dram of sarcasm, Sheridan characterized Colby’s evangelical sales pitch, one he finally arrived at after long sermons blasting Kansas as an infernal Babylon, in these words:

“Texas is the land where thistles grow figs and the ozone is temperance and virtue; where all become centurions; where Sam Houston had to kill a Mexican to start a grave yard; where gallinippers make honey and centipedes give sweet milk; where swamp lands yield grapes and desert plains answer the simoon with ten apple crops a year; where civilization’s refinement relishes a man for every breakfast and the ranches and the gospel mills resound with the music of the Winchester while the short, sharp strains of derringers inspire such as angels as Colby to missionary work in heathen Kansas!” (Editor’s note: “gallinippers” are large mosquitoes and a “simoon” is a “a hot, dry, dust-laden wind blowing in the desert, especially in Arabia.”)

Sheridan went on to mock what he claimed was Colby’s scheme to make Aldine an inland port and his “calling upon Paola people to flee from this Gomorrah ere the brimstone rain of resubmission comes.”

Few heeded Sheridan’s mockery — he fired off that screed in early 1899, and by the end of the year, Paola people were heading south to Aldine in droves.

Some of them had cause to regret that migration, if only for one awful night, and one hopes Sheridan was man enough to resist a round of “I told you so’s” in September 1900, when the weakened but still dangerous Great Hurricane ripped through Aldine and destroyed much of what the Kansans had built. 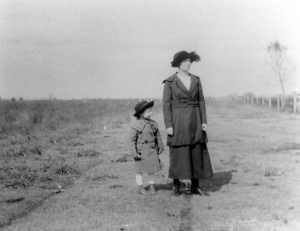 One of them, Carrie Canfield, sent a report back home ten days after the storm. “A night of horror,” she called it, with the winds whipping the rains right through their little house. “The house rocked back and forth as a cradle and we expected every moment to be whirled into the seething waters. Sleep did not enter many homes here that night.” The next day revealed that almost all of their worldly possessions were ruined — either soaked by the rains or blown to the ground. Their house survived, as did their horses, even though they had to be dug out of the fallen timbers that had been their barn. But the family survived intact, and Canfield’s letter closes on a note of optimism, like those of so many residents of the storm-wracked Texas coast in the years to come. You learn that there is always somebody suffering worse than you:

“Although we suffered quite a loss, we were thankful to escape with our lives. It is something terrible to know of the suffering and loss of human life that is all around us. The loss at Galveston cannot be estimated, as there were so many bodies washed into the gulf that can never be recovered. Houston, too, suffered severe damage. It was the worst storm ever along this part of the coast, and those who experienced it will never forget that terrible storm.”

(It seems odd to us, given that thanks to The Wizard of Oz, Texans associate Kansas with terrible storms, to see these Jayhawks fleeing Tornado Alley only to run into that mightiest of storms.)

Canfield’s letter then pivots on a dime. Despite what was then and remains today the deadliest natural disaster in American history, life goes on. Their potatoes, turnips, and green beans were all thriving, and roses were still in bloom. Their neighbors’ crops of strawberries were outstanding, making up for the Storm’s destruction of that year’s crop of figs. Canfield looked forward to more bountiful years to come, ones more like 1899 that saw them jarring 40 quarts of the sweet and sticky fruit’s preserves.

And that’s just what happened. The very next year, the Olathe newspaper noted that John Carpenter, the local attorney who moved to Aldine a few weeks before the Storm with dreams of fig production dancing in his head, mailed back several jars of preserves to his friends. “John and his father now own several fine pieces of fruit land there and they expect to go into fruit production on a large scale,” the paper went on to report.

They did. By the following year, he was selling preserves by the jar to railway dining cars and hotel restaurants, and by 1915 Carpenter had a fig cannery in Aldine that employed dozens after harvest. The Hurricane of 1915, blight, and World War I’s sugar rationing (you need lots of sugar to preserve them) put an end to large-scale commercial fig-growing in Aldine.