This is Part 3 of a series covering the History of East Aldine. Read part one “Early Days, and How Did Aldine Come to Get Its Name?” or part two “Jayhawks’ Roost and The Great Storm”.

Growing Pains: From Cougars to Moonshiners to Civilization

Aldine was still a pretty wild place in those days. The Houston Post reported in December of 1907 that a Mr. Clark of Aldine had trapped a catamount measuring three-to-four feet in length on his property. A few years later, E.C. Robertson, Colby’s partner in the Kansans-to-Aldine venture took out an ad in the Houston Post announcing his hosting of an event demonstrating a new form of high-tech farming — farming harnessing the might power of DuPont Red Cross Dynamite. “Come and learn the modern, quick, cheap and safe way to use the giant force of dynamite to remove stumps and boulders, plant trees, dig ditches, break up subsoils and make old farms produce big crops,” the ad encouraged. (The same ad also offered training for would-be apprentice agricultural blasters.)

In one prohibition-era raid, feds seized 76 gallons of wine and 37 gallons of whiskey in Aldine, suggesting the presence of at least one moonshine still of considerable capability.

When the first murders of note took place in Aldine, in the spring of 1929, they grabbed statewide headlines. On the evening of May 5, 21-year-old Westfield machinist Edward Stone and 20-year-old Olena Wuensche of Spring went out on a date that ended in horror. After dancing in the Woodmen of the World lodge in what is now Old Town Spring, the lovers went for a drink at an unnamed bar in Aldine before adjourning to a lover’s lane near Highway 19 (today’s I-45). That was where Stone was found near his parked car, blasted through the chest at close range with a shotgun. Wuensche was found a couple of miles away, near where Hardy crosses Green’s Bayou, shot through the shoulder blades. Detectives surmised that she’d been kidnapped and had tried to flee. Five suspects from Humble were arrested months later; none were tried, much less convicted. Decades later Harris County lawman Buster Kern claimed to have cracked the case, but he never shared his findings with anybody so you’ll just to take his word for it.

All of which, from wildcat to wanton murder, portrays Aldine in an incomplete and mostly false light. Yes, it’s exciting, but the real history of the places lies in the cornerstones of its civilization — schools, churches, businesses, roads, and such. By 1902, the Lutherans were competing with Presbyterians for the souls of Aldine, and by 1911, the village was home to a hotel, general store, two-room schoolhouse and a cemetery. In 1923, the Magnolia Oil Company put in a large crude oil pumping station, and at around the same time, many of the farmers had become stockmen, specifically dairy farmers. 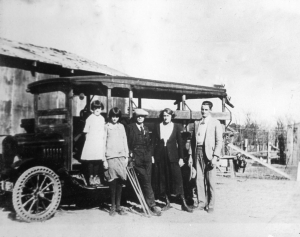 As the Depression deepened, Aldine saw the closure of its railroad depot (in 1931 or ‘32) and post office (1935.) However, in 1932, three surrounding villages consolidated with Aldine, and two years later the resulting S.M.N. Marrs High School sent nine graduates into the world armed with the first full diplomas awarded in Aldine. (Marrs was known by that name locally — as with most small town Texas schools of that time, outsiders simply called it by its town name, i.e. Aldine High School.) In 1935, voters approved the creation of the Aldine Independent School District, and so fast did it grow that by 1947 it was being called “the miracle school district.” In 14 years, enrollment multiplied in the two-building district — one each for whites and blacks — by 800 percent. AISD has been playing catch-up ever since — today it has around 70,000 students scattered across several dozen campuses.

But it wouldn’t get there without a hitch, or two, as we’ll see in the next installment.