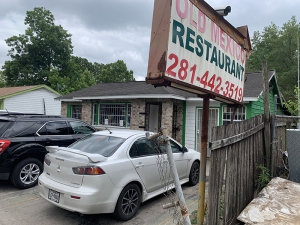 The Houston area in general and the Aldine area in particular are chock-a-block with great Tex-Mex places and it’s easy to forget trying out ones that are new to you, if not new to the world. These establishments remain treasured by those who have known them for a long time but secrets to the rest of us: Like birds, we are imprinted with our favorite Tex-Mex as soon as we hatch and tend not to stray far from the nest unless it is made necessary by the demise of our native habitat, as fans of Felix, Leo’s, many a location of Ninfa’s, Fiesta Loma Linda on Telephone Road, and Las Cazuelas and Doneraki on Fulton have found out the hard way over the years.

And some of us have never lost their favorite or have replaced it with some fresh angle on Mexican fare, like Mex-Mex, Cali-Mex or the Sinaloa sushi of East Aldine’s Culichi Town.

But like well-worn boots or your lucky T-shirt, sometimes only tried and true styles will do, and you can never have too many truly great comfort food restaurants in your rotation. One such you will surely love is Old Mexico on Hopper Road.

On a tip from Dr. Luis Alfredo Lucio, dean at the new Lone Star College-East Aldine campus, yours truly and Mexican food writer and ace photographer Marco Torres ventured over to Old Mexico in separate cars. Each of us drove right past the tiny restaurant, which is housed in what was, before the restaurant opened in 1981, a small dwelling like all the others around it. “That’s a good sign,” Torres said as we met up in the parking lot in back. And then we read the sign on the front door: “Sorry, no credit cards.” Torres laughed. “That’s another good sign.” After a quick trip to a nearby convenience store’s ATM, we were set. 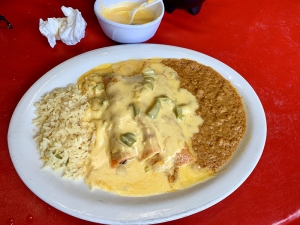 Old Mexico’s menu is simple: breakfast is served until 11 (later on Saturdays, it’s closed on Sundays) and offers the basics as well as machacado, chilaquiles, and huevos rancheros and Mexicanos. Plates start at around $6 and most come with fries, frijoles and your choice of house-made tortillas. (Though you can just order two breakfast tacos on their own for $5.25; hearty appetites and big spenders can go to the other extreme and opt for eggs with pork chops ($12.95) or eggs with a T-bone steak at ($16.95).

And here is another tell-tale sign of a great Tex-Mex restaurant: presence on the menu of combo plates, some of which can be ordered by number (for example, the number two combo of two enchiladas, a chalupa and a crispy taco) or by a name, such as the “Kevin and James Special Plate”: three cheese enchiladas, a side order of flour tortillas, and a Mexican Coke. (All with beans and rice, por supuesto.)

Torres very much enjoyed his caldo de res, afloat with slivered beef, cabbage, half an ear of corn and as much green squash ($8.95) and I was knocked about by my order of fajita enchiladas ($11 with drink), slathered in queso and wrapped in red corn tortillas, they are among the best I’ve had in town, a deceptively simple dish that excels through nailing it on the basics — tart and tender and chewy beef fajita, pillowy tortillas, and killer queso.

I was also impressed by the refritos — just the tiniest bit bubbly on the fringes of the hot plate, and wonderfully smoky. (I’ve long since been more of a charro bean man, but these are an exception.)  Alongside the cash-only requirement and blink-and-you-missed-it invisibility of the establishment, the menu’s time-honored ordering system, delicious refried beans are another good sign for a Tex-Mex hole in the wall. So is their guacamole. These days too many restaurants serve it up as a too-smooth, bland afterthought, but not at Old Mexico, where it comes fresh, chunky and flavorful. And hey — the first bowl of queso is on the house. 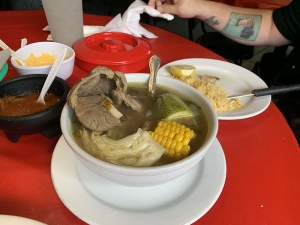 Two years ago, alongside such legendary establishments as Original Ninfa’s and wildly popular multi-location giants like Pappasito’s, Original Ninfa’s, Teotihuacan, Spanish Flowers, and El Tiempo, Old Mexico was named one of Houston’s top ten Tex-Mex restaurants in an online poll conducted by KHOU-TV.  It’s easy to see why, and Dr. Lucio told no lie when he said “Everything on the menu is good and it’s an Aldine classic!”

Soft drinks only. Cash only.

In consideration of measures aimed at stopping the spread of COVID-19, staffing of East Aldine District offices is limited at least through May 31, 2021 while staff works remotely on a full-time basis. Staff may be contacted as follows: