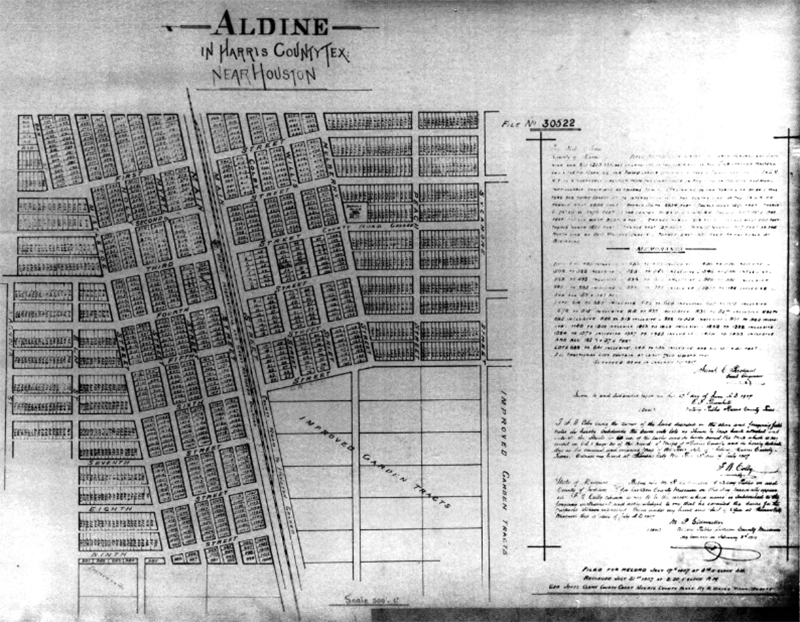 Well, if there is one thing you can learn from this 1907 plat map of the town of Aldine, it’s that time changes everything. Of the 20 named streets, only one today retains its name, and some have ceased to be roadways at all.

Let’s step back and orient ourselves. Those “improved garden tracts” in the southeastern corner of the map are today’s Morales Cemetery. Main Street on that old map is today’s Hardy, and Third Street is modern Aldine-Bender Rd. In small print, the mapmaker noted the site of the International and Great Northern Railway depot at the junction of Main and Third — the de facto center of town.

While the east-west streets were numbered, most of the north-south streets took the names of common American trees: Magnolia, Elm, Sycamore, Myrtle, Peach, Mulberry and Holly. (As Holly Street runs right next to Mistletoe, the street-namer had to have been a Christmas buff.)

Google Maps shows non-contiguous traces of Holly Street as still existent south of Aldine-Bender, in the neighborhood behind McCauley Lumber and the Risky Business beer joint, but I could find no street signs denoting it as such on the ground. The same goes for the “4th Street” and “5th Street” that Google turns up in that same area – though some blocks of what is now Hooker (old 4 th ) and Buffington (5 th ) lack signs, so that could be them.

Willis Street is old Aldine’s sole surviving original street name. This was one of only two streets whose name derived from neither a number nor a tree — the other the now-gone Colby Street, one block to the west.

By “gone,” I mean just that, in the fullest sense of the word. Widening Hardy to full-blown interstate size obliterated some old streets utterly. There are a few old Aldine roads whose onetime existence is only visible through satellite imagery, but you can’t tell that Colby was ever even there, and the same goes for Myrtle on the other side of Hardy.

The widening and improvement of Hardy and Aldine-Bender have had the profoundest effect on the physical street grid of old Aldine, but how did it come to pass that all but one of the streets lost its name?

My best guess would be that the names were changed after Aldine’s post office closed in 1935 and mail service merged with Houston. Back in those days, the closure of a post pretty much meant that Aldine ceased to exist as a distinct town, and now that Houston postal carriers would be handling most of their mail, there was danger of confusion, lost mail, dead letters everywhere.

Every street name in Aldine had a duplicate in Houston, so Aldine needed to come up with unique names in order to help out the USPS. Peach, Holly and Mistletoe wound up in the wood-chipper, and out came Yarberry, Ormel, and Henry Road. All the numbered streets were likewise renamed, but by the time they got around to doing so, many of them had ceased to exist. Old Aldine’s character had changed from residential / mixed farming / orchards to light industrial / residential, and that shift led to larger lots, and as those lots expanded, most of the east-west conduits disappeared. Today, only Aldine-Bender, Buschong and Hodgkins survive.