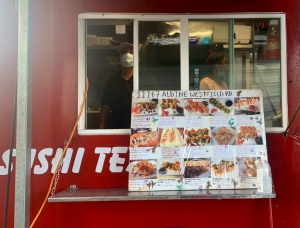 One thing that separates East Aldine from everywhere else on Planet Houston — nowhere from the San Jacinto River on the east to the Brazos on the west will you find not one but two restaurants specializing in Mexican-style sushi. And those restaurants are a few minutes’ walk from one another on Aldine-Westfield Rd.

We’ve spotlighted the bricks-and-mortar establishment Culichi Town before and now it is the turn of Sushi Tex Mex, a food truck a dozen or so blocks south that opened at roughly the same time.

Like the Sinoloan owners of Culichi Town, Sushi Tex-Mex’s owner Luis hails from Mexico’s Pacific coast — his case the state of Guerrero, best known in the US for having Acapulco in it. It is along that Far East-facing coast, the land of banda y cerveza, that sushi has been getting Mexicanized for a few decades now.

Speaking through his daughter Elida’s translation, Luis said that he had worked in Houston-area Japanese restaurants for many years before striking out on his own with this food truck. “He’s been working in Japanese restaurants all his life, so he knows the industry,” Elyda said. 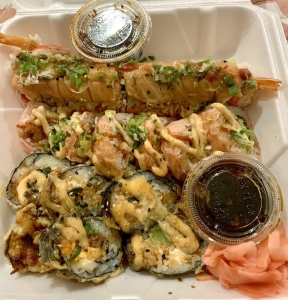 And he has a creative flair all his own, too. I am a diligent pilgrim ever in search of Houston’s very finest cheap eats, and the $7 oyster roll at Sushi Tex-Mex is among the best anywhere in the entire metro area. A creation of Luis, this treat from the deep features fried oysters, cream cheese, avocado, and jalapeno wrapped and topped with unagi sauce, sesame seeds, and a light drizzle of mayo. Come to think of it, not only is it one of my favorite cheap dishes in town, it is also one of my favorite oyster dishes. And this is coming from a guy who once worked full time as an oystershucker.

That was the best of a three-roll platter I treated myself to, which also included the Mexicano roll (cream cheese, salmon, shrimp, and jalapeno topped with spicy mayo, sriracha, unagi, and green onions), and the tuna-based green albacore roll.

Other diners sing the praises of the Nance (pronounced “Nancy”) roll, the Shaggy Dog (or “Chaggy,” if you prefer), and also the fried rice, which comes with two egg rolls along with shrimp, mayo, spicy sauce, and vegetables. As you can see, that also offers a Mexican twist on an Asian classic.  And then there are even more exotic, tropical fruit fusions, such as the Mandarina roll, with mango and tangerine combining with rice and seafood, and the Banana roll, doing the same with that ubiquitous fruit. You may not think you want fruit sushi, but once you try one of Luis’ rolls, you want to try them all. 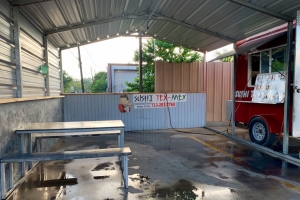 Today sushi is everywhere from the deli section of many supermarkets to five-star restaurants. Sushi Tex Mex is the absolute best of both worlds: it offers five-star quality sushi at sub-supermarket prices (nothing on the menu is more than $10) served with style and flair: Each order comes with chopsticks, soy sauce, wasabi, and fresh pickled ginger and your rolls come artfully arranged even in styrofoam to-go containers. What’s more, as a food truck and not a brick-and-mortar establishment, it’s a relatively safe place to fill up in these pandemic times. Sushi Tex Mex is an East Aldine gem, a food truck any neighborhood should feel blessed to have.