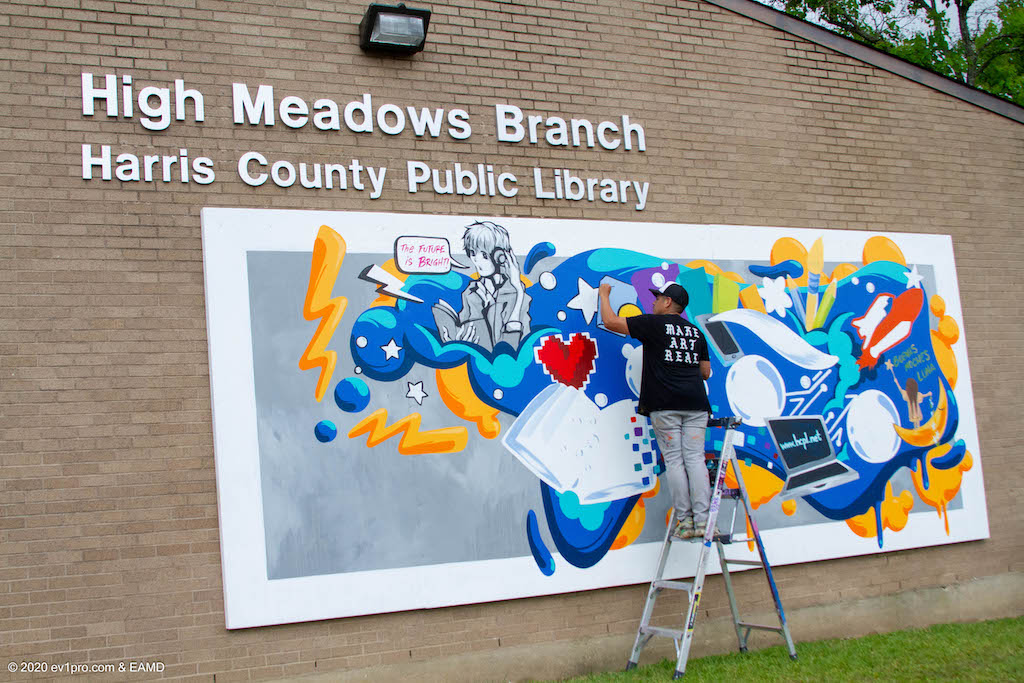 Scattered showers did little to dampen the enthusiasm for a splashy new commemorative mural unveiled at the High Meadows branch of the Harris County Public Library in East Aldine recently.

Art enthusiasts turned out in bunches to participate in The Mural Fest, which included creating their own artistic endeavors through the Art Bus and the Curiosity Cruiser.

For mural artist Jesse DeLeon, the new outdoor library mural made him feel like a human barometer, as he struggled to complete the brightly colored wall in an on-again, off-again week-long rain.

The mural was designed to celebrate the 100th anniversary of the Harris County Public Library system and the East Aldine community.

“Every time I pick up my paint brush, it starts to rain again. I’m the ‘on-off’ switch,” DeLeon said. “If I stop painting, it stops raining.” 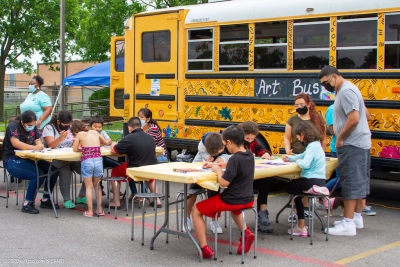 The mural captures the essence of the new, modern library, featuring a “thought bubble” filled with all the amenities the East Aldine community can find in the High Meadows branch at 4500 Aldine Mail Route.

Next to a caption saying, “The future is bright,” the mural shows an anime-style teen reading a book while listening to music. A lap-top computer includes the library’s web address, www.hcpl.net. And there is a special tribute to the classical children’s favorite “Buenas Noches, Luna.” (Good Night, Moon).

DeLeon has worked as a mural artist for the past 15 years, including painting and teaching for several Houston-area nonprofit organizations. His murals can be seen on five metal traffic control boxes across the area, from Memorial Drive to Tidwell Road.

The Mural Festival was part of the Big Walls, Big Dreams program sponsored by the East Aldine Arts Council and UP Art Studio.  It was also a celebratory day for the library: For the first time in more than a year, the High Meadows branch library was open on a Saturday. The library reopened on May 19, and is operating at half-capacity, as a precautionary measure as the COVID-19 pandemic eases.

Librarian Jane Holt and her staff, wearing masks, were smiling and happily greeting patrons. After a year-long shutdown due to the pandemic, the library staff is eager to enter their second century with full services that “extend from cradle to grave,” Holt said.

The library’s computerized resources are fully available online, with a goal toward serving the diverse Aldine community. From audio books to streaming music, the library is popular with students at nearby Hambrick Middle School and MacArthur Senior High School. But the library also offers programs for post-secondary learners, including an online tutoring program, Learning Expressions. The service allows users to practice for all different kinds of licensing exams, ranging from nursing to citizenship tests.

And, special programs for senior citizens include large-print volumes that are accompanied by an audio book, a movie, crossword puzzles and other activities. Holt said that many seniors who enjoy reading like the variety of activities that may come in a packet. 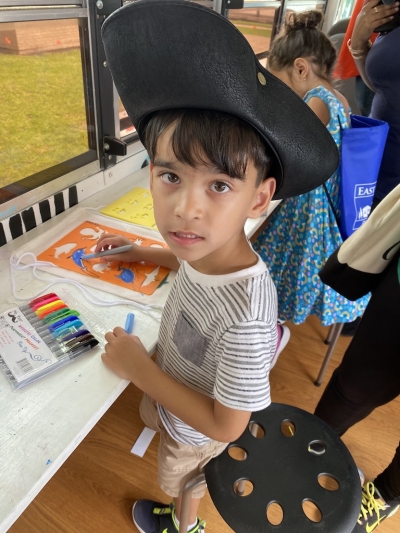 “People often make the mistake that seniors don’t want to read. Once a reader, always a reader,” Holt stressed.

The library’s summer reading program for children would launch soon, she added.

Holt said she hopes that the new mural will remind area residents of the library’s wide range of services.

“I want it to make people think about all the things a library can do for them,” Holt said. “There will always be books, but we also offer all kinds of technology.

With funding from the East Aldine Management District, UP Art Studio commissioned DeLeon to design and paint the new mural, The brightly colored wall replaces a mural that encouraged Aldine-area residents to participate in the 2020 Census.

The East Aldine Arts Council was created in 2020 as a committee of the management district to promote the visual arts throughout the East Aldine community. UP Art Studio has already completed the first two mini-murals on traffic control cabinets, at Aldine Westfield Road and Greens Road, and at Little York Road.

The council’s upcoming projects include the completion of a wall mural in the District’s new Town Center office building.