The nationally televised Kelly Clarkson Christmas Special show handed out a huge gift that could end up benefiting East Aldine kids who like to make art.

The Texas-born Clarkson, comedian Amy Poehler and the H-E-B supermarket company gave a surprise $100,000 grant to Art Bus creator Roni Cabrera-Moreno of Houston to help her obtain a building where she can expand her Bus-type programming into a “brick and mortar” art studio. 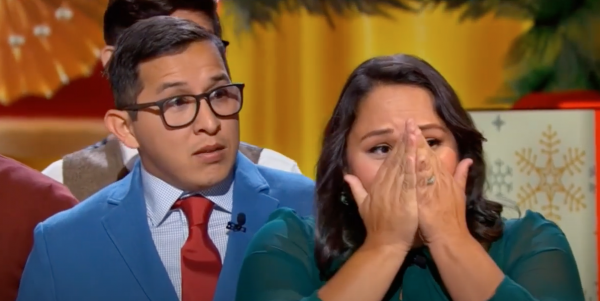 The Art Bus, which Cabrera-Moreno has been operating on a modest budget with the help of donations and T-shirt sales, has made multiple appearances at events in the East Aldine Management District.

The District featured Moreno’s work and vision in a February 2021 article.

Houston’s NBC TV affiliate, KPRC-TV Channel 2, picked up on the story in September. An assistant producer for Clarkson saw the TV feature story. A crew came to town and filmed Cabrera-Moreno and her work on the Houston area’s north side. Then the show offered to fly Cabrera-Moreno, her husband and their four sons to Los Angeles for a video-taping of Clarkson’s holiday program.

In 2020, the whole family had helped turn an old, broken-down yellow school bus into a moveable art studio. The teens had been responsible for ripping out the seats to install artists’ drawing boards and stools for children. All because their parents saw the bus for sale and decided it would be the start of Cabrera-Moreno’s drive to bring arts to underserved communities.

With the studio cameras rolling in L.A., Carbrera-Moreno was speechless when Clarkson and Poehler revealed the $100,000 gift.

“We were just excited to be going on that trip, because only one of my boys had ever been on a plane before,” she said later. “We had no idea whatsoever that we were going to receive this grant.”

After the show, Moreno said she and her husband took their sons out for an Italian dinner in Los Angeles. “It took us a while just to calm down,” she said.

The funds have been deposited in a trust while Cabrera-Moreno seeks legal and financial advice about setting up a non-profit organization to develop the arts studio. In the meantime, she is continuing her efforts to so that kids can enjoy the magic of the holidays through crafts and art.

At a recent festival celebrating national Hispanic Heritage month, the Art Bush welcomed kids and their parents and they painted and decorated Halloween and Dia de Los Muertos masks.

Usually, Norbert Moreno and the boys help with setting up the bus and outdoor tables with supplies. Then, they can be seen enjoying board games or listening to music while Roni works her creative magic.

Cabrera-Moreno said her permanent art studio will be located in her home community, the Eastex-Jensen area in north Harris County. It would include space for children’s art classes, as well as low-cost studio space for artists and artisans. An outdoor area, for art shows and sales, would be ideal, she added.

Meanwhile, she continues teaching art classes three days a week to children in the Houston area.

On Mondays and Wednesday afternoons, Cabrera-Moreno offers free art classes for children in the community center at Pep Mueller Park, at 14750 Henry Rd. The classes are held from 4:30 to 6 p.m. The park is located just across the street from Odom Weaver Elementary School.

On Tuesday afternoons, Moreno teaches a free art class for children at Friends of Northside, at Ecclecias Church, at 6615 Irvington, near Loop 610 North. Those classes are from 4 to 5:30 p.m.

Cabrera-Moreno said she was inundated with calls from friends and supporters after Clarkson’s show aired.

“Even though it’s been six weeks since I learned about it, I’m still in disbelief,” she said. “I keep saying to myself, ‘Has this really happened?’ ”

“I just feel like my dreams keep coming true,” she added. “I’m doing what I love, with the people I love. I just have to keep reminding myself that it’s real.”