This is Part 4 of a series covering the History of East Aldine. Read part one “Early Days, and How Did Aldine Come to Get Its Name?” or part two “Jayhawks’ Roost and The Great Storm” or part three “Growing Pains: From Cougars to Moonshiners to Civilization”. 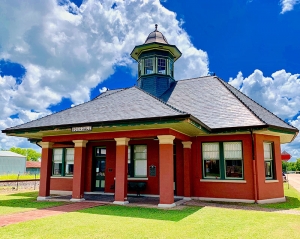 In 1873, the International and Great Northern Railroad laid tracks north from Houston to join up with the other main branch of their line at Palestine and what is now Aldine lay along the route.

Victorian steam engines needed near-constant replenishment with coal and water, so the railroads built stops every ten or 20 miles whether or not the areas were populated. Aldine, first known as Prairie Switch, got its start as the second such supply stop north of Houston, one just beyond another called Crosstimbers and just south of the Westfield, Spring, Haltom’s, Egypt, and Grand Lake stops.

The railroad companies hoped that these stops would evolve into shipping points, towns or even cities, but they had mixed results on that score, as you can see by the names listed above — Haltom’s, Egypt and Grand Lake are all long since ghost towns if they ever lived at all; Crosstimbers lives on only as a Houston street. Spring and Aldine are among the survivors.

Tragedy and dark comedy arrived along with the trains. In May of 1876, a Galveston newspaper reported the burial of “an unfortunate man whose name is supposed to be Charles Collins, killed by the International and Great Northern train accidentally running over him at Prairie Switch.” A few months later, the same paper published the account of a briefly infamous and very fortunate Austin County man whose name was always reported only as “Dibbe.” This Dibbe had been convicted of murdering his own father and was sentenced to hang. Governor Richard Coke commuted Dibbe’s sentence to either life, or, as one account had it, a single year in prison; in either event, that decision was unpopular, and for a few days thereafter Texas newspapers mocked Coke for being soft on crime.

You would have thought Dibbe would have been happy just to be alive as he and a couple of guards rode north from Houston towards his new digs in Huntsville’s Graybar Hotel, but this Dibbe was not satisfied with a mere reprieve from the gallows. As his train passed through Prairie Switch, he jumped out while it was still rolling. And that was about as far as his escape attempt went — it was far bolder than wise. Dibbe badly sprained his ankle on contact with the ground and was immediately apprehended by his guards. But don’t be giving those guys any good cop awards just yet: the newspaper went on to report that Dibbe was not only “unshackled and unconfined,” but also “drunk on lager beer obtained in Houston.”

That’s right — these two guards loaded a drunk man completely unhindered by either handcuffs or leg-irons and possibly facing life imprisonment, aboard a passenger train.

Man, prisoner transport sure has changed since then. And you have to imagine that when they got Dibbe back on a Huntsville train, he was both in irons and sober. 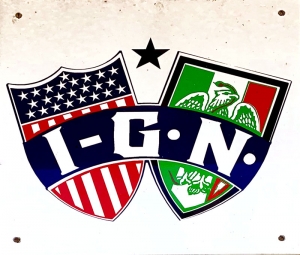 North of Spring, the I&GN chugged north to Palestine, where it joined the main body of the railway coming in from Laredo and San Antonio via Austin, Round Rock, Taylor, Rockdale and Hearne. At Palestine, the line beelined northeast toward St. Louis, with branch lines for major river ports at places like Memphis and Cairo, Illinois. Once there, goods and people had entered the settled, civilized world — to Texans, the hub city of St. Louis was as much a gateway to the east as it was a portal to the west for people from, say, Kentucky or Maryland.

For Aldine, it was how all the Kansans who came in such numbers in the early days of the town arrived and went home to visit friends and families, and how all the figs that were grown there left for faraway markets. Or maybe never made it off the train — fig preserves were a very popular item in the dining cars.

Aldine’s depot once stood near the northeastern corner of Hardy and Aldine Bender, so as Allen’s Landing is to Houston, so that corner is the Plymouth Rock for Aldinites. Around that depot, you once had Aldine’s first hotel, general store, school, church, post office and houses, all of which were in place around 1912, along with a cemetery, most likely the earliest portion of the one that is now Morales/Santa Teresa.

Bisected by Aldine Bender/FM 525, the little town was bounded on the south by Aldine Mail Route, on the north by Greens Bayou, and on the east by Luthe Road. With its western boundary at Lillja Road, it straddled the International & Great Northern Railroad/today’s Hardy Road. Fascinatingly, there are some remnants of streets to the west of that roadway that almost certainly belonged to a lost Aldine street grid. If you are westbound on Aldine Bender and hang a left on Henry Rd., out of nowhere you will come across a 4th Street and a 5th Street, neither of them more than a block or two long. Where are 1st, 2nd and 3rd streets? Why do only these stranded remnants survive?

The depot closed in 1931 or 1932, amid very hard times for Aldine and the world. As locomotives switched to diesel, fewer stops were necessary to maintain the engines, and as more people got cars and trucks, it was easier for them to drive to depots farther away. And as the Great Depression broadened, Aldine’s population shrunk to a few dozen people; a sort of calm before the storm, as Houston was marching northward to envelop Aldine.

But that would not come for another ten years or so. And in 1956, the International & Great Northern Railroad ceased its corporate existence — today its tracks are operated by Missouri Pacific, or MoPac.