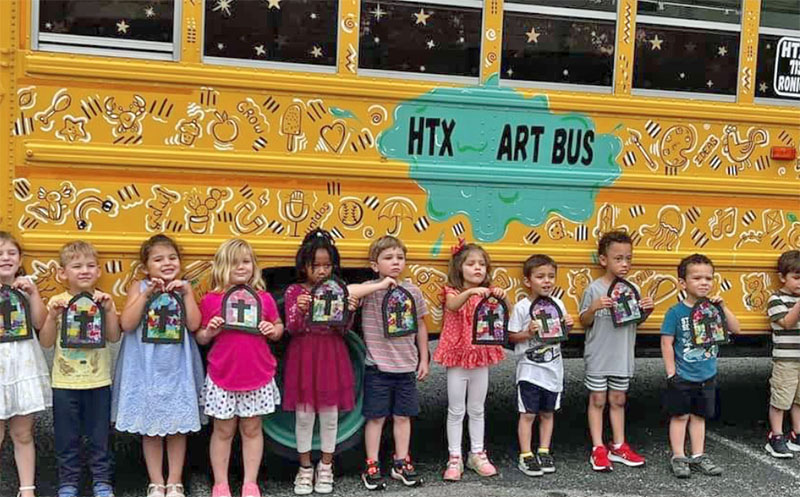 As Houston artist and inspired educator Ronnie Cabrera’s Cinderella story grows, so does her workspace.

Her original traveling studio and classroom that has helped enrich public events in the East Aldine Management District, is the 115.5 square feet inside a used school bus called the Art Bus. 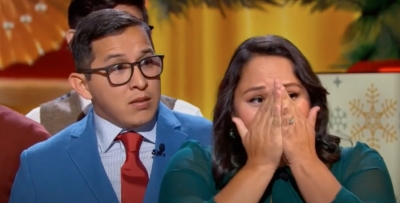 In fact, she and her husband, Norberto Moreno, and their four sons have supported community events with arts activities and classes for kids of all ages throughout northeast Harris County.

Cabrera aims to continue bringing the bus and its art classes to the East Aldine and the Eastex-Jensen communities. But now, she has built out a bright-yellow, 8,950-square foot, two-story studio, called ART in the HEART, that will house art classes and exhibitions for kids and artists. It’s a short trip south of the District at 8321 Jensen, where an open house will take place May 28.

The location includes a backyard home for the Art Bus, a big stucco wall for murals, and a bright lounge area for parents and artists to drink coffee in the air-conditioned space.

Registration for summer classes is already underway as Cabrera and her family and friends rush to put the finishing touches on the “brick and mortar” space. Moveable walls will allow the studio to be divided for summer camp group and arts classes or opened for art exhibits.

It’s been just over two years since the couple decided to purchase a broken-down, old school bus and convert it into a mobile art studio that has offered classes to underserved kids across Houston. Their teen-aged sons, who ripped out the seats and helped stain the floor of the old bus, are taller and wiser. Although the boys frequently help set up for community events, they now know to bring their music and headphones, or board games, for entertainment.

After the East Aldine Management District published an article about the Art Bus in February 2021, Houston’s NBC TV affiliate, KPRC-TV Channel 2, picked up the story.

A producer for Texas-born Kelly Clarkson’s NBC Christmas TV special saw the TV news report. The show offered to fly Moreno and her family to Los Angeles for a video-taping of the annual holiday program. During the taping, Clarkson, comedian Amy Poehler and the H-E-B supermarket company gave Cabrera a surprise $100,000 grant to obtain a building where she could expand her programming on wheels into an art studio.

The rest, as they say, is history — in the present tense: Cabrera recently drew a large crowd at “Toddler Tuesday” at downtown’s Discovery Green, where very young artists were enchanted by a larger-than-life representation of a toddler who prowled the colorful bus. The bus was also on hand for a celebration of the late singer Selena’s birthday, where customers at Blanca’s Café in the East End neighborhood sang karaoke to the Latina star’s most popular songs. 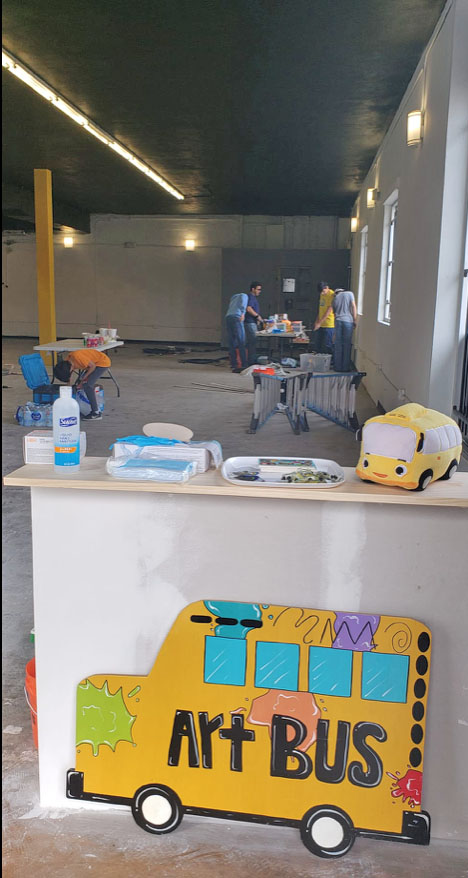 Cabrera has leased her studio from Raymond Taylor, “who is passionate about arts and the community,” she said, and Taylor even agreed to build an 8-foot stucco fence around the parking lot.

“Eventually, we will be able to paint murals on the fence,” Cabrera said.

“Infected” by Cabrera’s fever, Taylor recently purchased the vacant lot next door to the studio for future pop-up markets or permanent art installations, like sculpture crafted by local artists and welders.

“He’s really gotten caught up in this,” Cabrera said. “Mr. Taylor wants to see a difference in the neighborhood.”

Cabrera hopes to remodel the second floor into lofts for area artists who will be encouraged to lend a hand teaching classes.

The downstairs area has a cozy and brightly colored seating area. A labyrinth has been painted in the center of the highly waxed concrete floor, which will serve as the exhibit space.

The studio will also feature a 3-D printer and a laser cutter, “because technology and art go hand in hand now. It’s good to give people experience in these things,” Cabrera said.

The studio name ART in the HEART is based on Norberto Moreno’s idea of “Houston, Economy, Arts, Recreation and Technology.”

All of those factors can contribute to growth and prosperity in the northeast Harris County economy, Cabrera said: “To be able to have a space like this, where people can come, is a real blessing. What we hope to do is bring art and color to the community.”

“When you come into parts of this neighborhood, all you (might) see is trash, concrete and construction,” Cabrera added. “If you bring a bunch of artists into the community, you will start to see beauty.”

Cabrera, who lived for a while with her grandmother while growing up, still remembers how she wanted to “paint and draw” on everything. So, her focus remains on the children she is reaching through art. 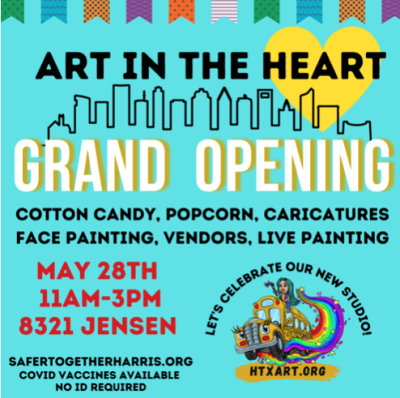 In a class she taught this year for the Attack Poverty program, Cabrera had a young student who had recently lost her father. The shy girl was sad and didn’t want to attend school, but her mother coaxed her into the art class on the bright bus.

“She began to look forward to Tuesdays, because that’s when the art classes were held,” Cabrera said. “We had a big exhibit the last night, and everybody’s art was on display, and they all got dressed up.”

At the end of the exhibit, the little girl didn’t want to leave, Cabrera said.

“Fortunately, we were able to hold a second semester of classes,” Cabrera said. “I don’t think I’ll ever forget the look on her face.”

“Being able to reach these kids through art is a real gift,” Cabrera said.

Click here for information about the grand opening of Art in the HEART and summer classes.